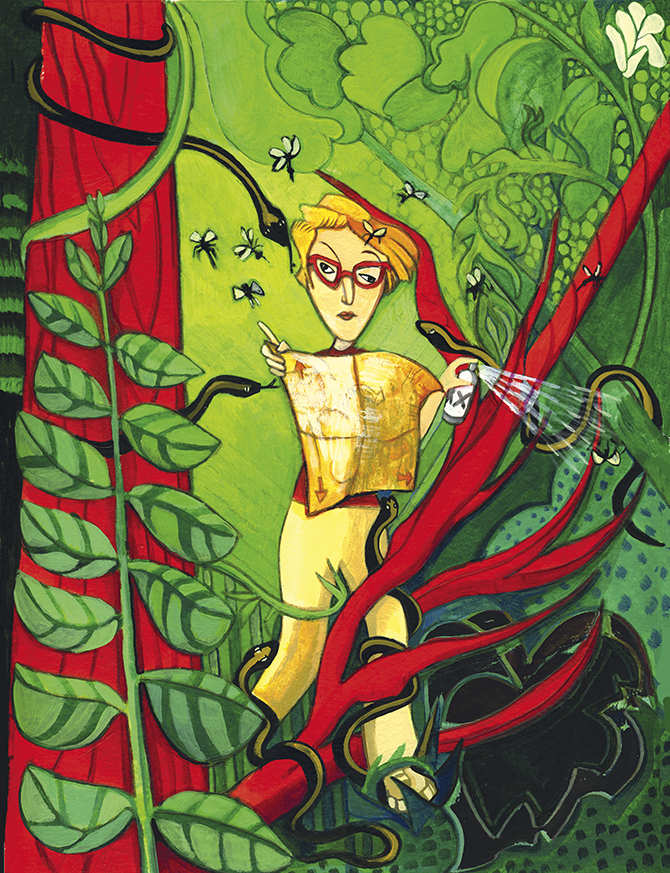 Functioning with an ADHD brain is like trying to forge a path through a rain forest. You have to chop back the vines of thought that threaten to trip you up, fight off the mosquito-swarms of ideas that pester you, conquer the black mambas of distraction, and hold a map directly in front of your face to have any hope of staying on course.

When I was in ninth grade, everybody in the school got to skip class one day to go stand in line for a vision screening. I learned that day that most people can read an eye chart with one eye closed. I can, too, if my right eye is open. In it, I have 20/20 vision. In my left eye, though, I have 20/200 vision, which means I can’t make out the capital E at the top of the chart.

I wasn’t happy at the idea of wearing glasses until I walked out of the ophthalmologist’s office with them on. In that moment, my life changed. Before, the leaves of birch trees were patterns of greens shading into silver. Now, I saw, for the first time, each leaf’s distinct color, and I saw the edges, so clear they seemed chiseled out. Who knew? And why didn’t somebody tell me sooner?

I had a similar experience when I was diagnosed with Attention Deficit Hyperactivity Disorder (ADHD) a few years ago and started taking mind-alter-ing drugs. In Kentucky, we’re justifiably concerned about the misuse of amphetamines. Sometimes though, we forget there are appropriate uses for amphetamines. For some people — me, for instance — they’re life-giving.

Wait a minute. Can middle-aged women actually be ADHD? Isn’t it mostly diagnosed in boys who are unruly in grade school? And, hey, can’t it be cured with more exercise, the right diet, a good therapist, or parents who discipline appropriately?

On the surface, the attributes don’t sound bad. People with ADHD have highly absorbent brains, allowing us to grasp huge amounts of information. Our brains are loosely organized, which means we have instant access to material — events, lullabies, place names, conversations, the Chaucer we memorized in eleventh grade, movie plots — that most people couldn’t retrieve with a pitch-fork, a shovel, and a treasure map. We are given to metaphor and simile and can draw bridges between unrelated topics. We have a relative lack of inhibitions that lets us act and communicate with unusual freedom and authenticity.

There’s another side of the picture though. Functioning with an ADHD brain is like trying to forge a path through a rain forest. You have to chop back the vines of thought that threaten to trip you up, fight off the mosquito-swarms of ideas that pester you, conquer the black mambas of distraction, and hold a map directly in front of your face to have any hope of staying on course.

That’s because the thoughts in my head are like fireworks inside a tornado, in a blizzard. In my every waking moment, a shower of sparks, a cow, an egg, a pair of tennis shoes, a tractor trailer, a roof, three verses from Ecclesiastes, a straw, a few brightly colored silk scarves, and most likely a Leghorn chicken or two vie simultaneously for attention. Thoughts romp, ideas skitter, conversations replay, and images scamper, all to the accompaniment of rapidly changing background music. Sweet Caroline may be replaced by Pack Up Your Troubles in Your Old Kit Bag segueing into On the Cover of the Rolling Stone with Victory in Jesus nipping at its heels.

Pre-glasses, I’d assumed nobody could see individual leaves on trees. Pre-ADHD drugs, I assumed everybody’s brain was a constant carnival. Then I was diagnosed and prescribed a Ritalin derivative. Within half an hour of taking it, the world changed. My thoughts stopped cavorting, assembled themselves in tidy formation like well-trained soldiers, and passed in review in sequential order.

Who knew? And why didn’t anybody tell me sooner?

One reason is that I’m female. According to The Attention Deficit Disorder Association, boys are more likely than girls to be diagnosed in grade school, especially if the impairment has to do with a girl’s inner distractibility, mental restlessness, and daydreaming. The difficulties don’t show. Sari Solden, in her book Women with Attention Deficit Disorder, says people with ADHD tell therapists they are overwhelmed, depleted, confused, frustrated, and exhausted. Most people lay claim to those adjectives at one time or another, which means, as Solden points out, the “level of internal difficulty is invisible” for women with ADHD.

Then, too, the thought of taking amphetamines makes us nervous. No, wait. The thought makes other people nervous. Amphetamines actually calm me down. My only regret is that I didn’t start taking them sooner.

For some of us — not only people with ADHD, but those with conditions like bipolar disorder, anxiety disorders, depression, and learning disabilities — medications are one step shy of the miraculous. They can’t eliminate the impairment, but they can let us function in spite of it.

Until I started taking the drugs, all I knew was the flash of fireworks, the eye of the tornado, and the confusion of the blizzard. I didn’t know there was another way to live. Now I do. And now you do, too.

Do you have ADHD? What strategies have helped you adjust and keep your life on track?