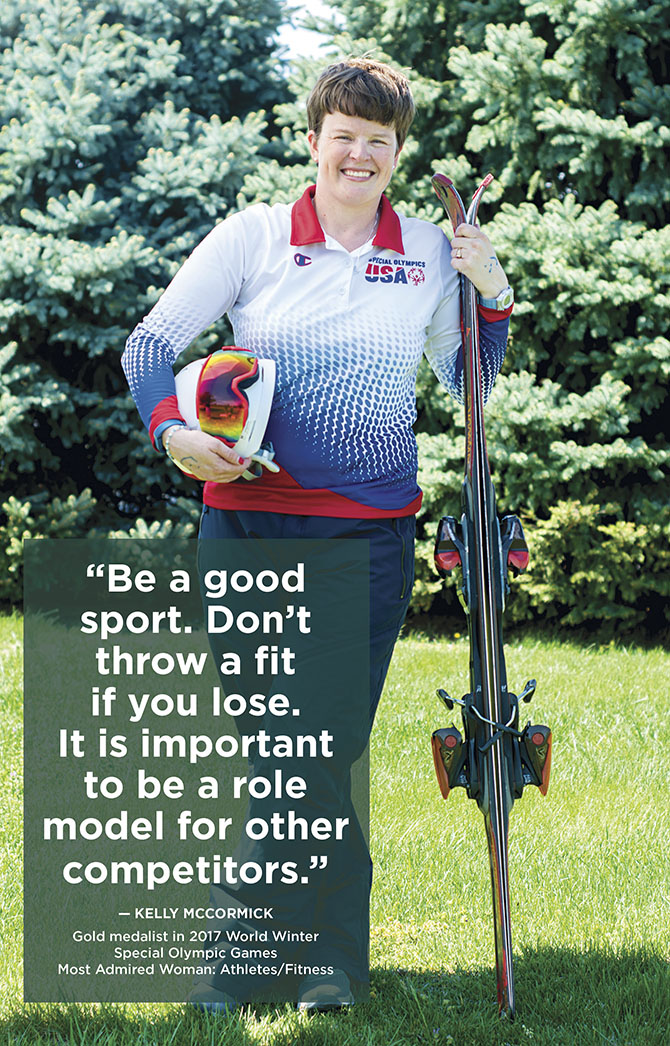 Kelly McCormick knows no fear. When she was 9 and first skied down the snowy course at Butler State Park, she found her calling as an athlete. Now, 25 years later, she has competed three times in the World Winter Special Olympic Games and has won a medal each time. She won a gold medal in the Giant Slalom* event at the 2017 World Winter Games in Austria. She placed fourth in the Super Giant Slalom as well. When she is not practicing her ski moves, she volunteers with Metropark Adaptive Leisure Center in Berrytown.

In her own words:
First and foremost I am an athlete. I am an accomplished competitor, a good friend to people, and I help people out when I can.

Trait you have that carries you through.
I have a positive outlook on life.

What other Special Olympics have you entered?
In 2013, I competed in South Korea and won a gold medal for the Giant Slalom and also competed in Idaho where I won both a silver and a bronze medal.

How did you discover you liked skiing?
I just thought that I wanted to try it. When I was 9 years old I tried it at General Butler State Park. I liked it. It was fun.

Other sports you participate in?
Softball, basketball, bocce ball, and bowling. I also like archery.

What are some of your hobbies?
I belong to a book club and enjoy arts and crafts and painting.

A defining moment?
That first ski run at Butler State Park. I’m the only one in my family who skis. I just wanted to try it out.

What’s on your bucket list?
I want to go parasailing and zip lining.

What is your most treasured possession?
A gold bracelet with my initials on it — KCM. My brother Patrick gave it to me. He passed away on my 24th birthday. He was 26 years old. He owned a 1965 Classic VW that we kept in the garage for 10 years. This year we sold it to pay for the trip to Austria.

How do you relax?
I listen to a lot of music. I like Kenny Loggins and the soundtrack from Grease.

What have you learned about competing?
Be a good sport. Don’t throw a fit if you lose. It is important to be a role model for other competitors. I try to live by the motto of the Special Olympics: “Let me win, but if I cannot win let me be brave in the attempt.” I also like to cheer on and clap for the other competitors.

Strange food preferences?
I love green apples but not red. My favorite candies are Peeps at Easter.

How do you jump-start your day?
With a good breakfast. Sometimes oatmeal and a banana or sometimes a peanut butter and jelly sandwich and a banana. And, I drink lots of water.

What’s next for you?
The State Summer Games. I will be competing in Bocce for the first time. The games will be this month in Richmond, Kentucky.

Any travel plans not connected with competing?
In July, I’m going to Hawaii and will be in the wedding on the beach for my stepmother’s niece. I will be passing out leis.

What jobs have you held?
Right now I work at the Home Store. I worked at Meijer in Stoneybrook for 15 years. I also worked at Kentucky Artisan Distillery, a small bourbon distillery in Crestwood.

What chores are you responsible for around the house?
Whatever Mom asks me to do: laundry, ironing, take out the trash…

Parting words:
I want people to join in and be a part of the Special Olympics. We are a family and it is fun to do.

*Giant slalom (GS) is an alpine skiing and alpine snowboarding discipline. It involves skiing between sets of poles (gates) spaced at a greater distance to each other than in slalom but less than in Super-G. Giant slalom and slalom make up the technical events in alpine ski racing.

This category is sponsored by BB&T. Photo by Melissa Donald.