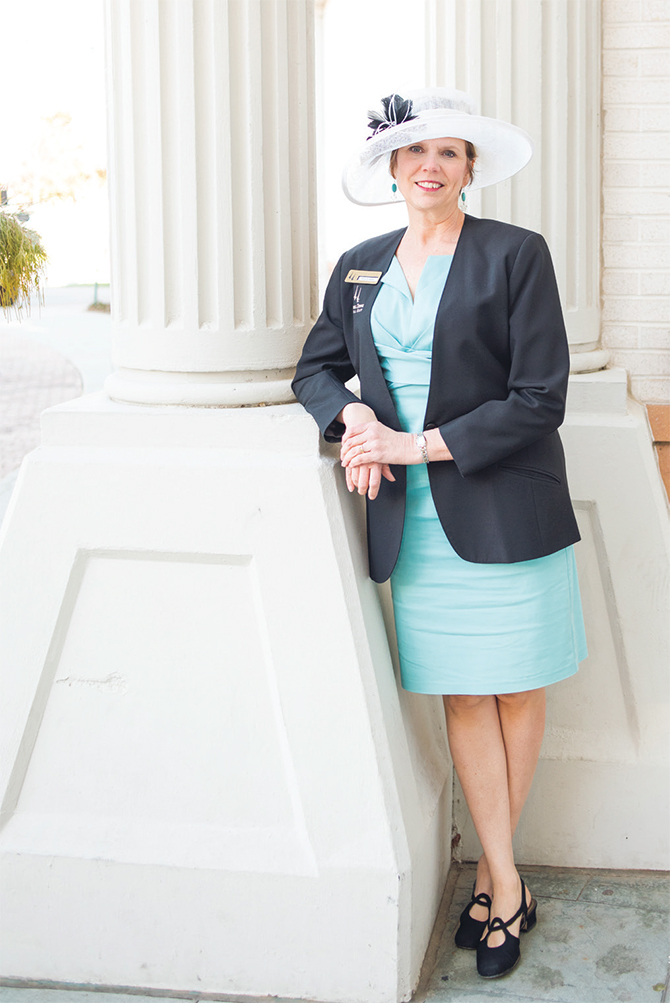 Alice Bridges wears many hats, including on occasion a fancy Derby hat as a Churchill Downs Host ambassador, welcoming horse owners to the track on Oaks and Derby days. But she also is a convener, communicator, coordinator, facilitator, community advocate, fundraiser, marketing manager, and health and wellness champion. But throughout all those roles, Alice says “her passion is helping all people to thrive.”

For more than 30 years, Alice has been a familiar face in the Louisville community, working for organizations such as Jewish Hospital and KentuckyOne Health to advance mission and health and wellness initiatives. In 2016, Alice served as a core team member for the Robert Wood Johnson Culture of Health Prize. Louisville was one of seven cities (out of nearly 200 applicants) to earn this prestigious prize. “As delegates, we shared and facilitated ongoing learning with fellow Louisvillians to support a continued journey toward creating a community-wide culture of health where all people thrive,” Alice says.

In 2017, Alice started her own firm, AOB Consulting, with a focus on community health and creative initiatives that address the root causes of poor health, especially among the most vulnerable.

“One of the biggest obstacles to a healthy community is that, unfortunately, we are still a city of great inequities in health outcomes,” Alice says. “It’s unacceptable and morally challenging to see the difference in the most basic measure of good health — how long you live. When people live 12 or 13 years less than someone who lives 10 miles away, it’s not only unjust, but it drags down the health status of our entire community. We have a calling to look after the last and the least.”

Some of the underlying social determinants of health — in other words, the factors that actually help people thrive or not — include what our neighborhoods look like, job or educational opportunities, and how mobile we can be, according to Alice. “I feel like a lack of transportation for people that’s workable for them is a real challenge for our community.”

Alice gives an example of a real-life scenario she often tells people. “Put yourself in these shoes for a minute: You have no car and two young children, one in preschool and one school age. It’s 7 in the morning … go!” Think about how hard it would be to get your kids where they need to be and get yourself to your job, not to mention that with any complication whatsoever, everything goes downhill.”

For underserved populations, Alice works to bring together partners to assist with access to healthier food options, employment, education, and health to create solutions. “One of my strengths is action and implementation, not just talking around a problem, but facilitating and getting after the end goal in a way that makes people feel energized and want to keep coming back to the table,”Alice says.

A major project on the horizon that Alice is helping to launch is the new Passport Health and Well-Being Campus at 18th and Broadway. “I am excited to play a role in helping to create this 20-acre development, which will give an economic injection of investment and resources to the area,” Alice says. The Health and Well-Being campus itself will be anchored by Passport’s headquarters, a four-story, 330,000-square-foot building, which will break ground in spring.

Other elements planned for the campus space include a cafeteria, meeting space for up to 500 people, a community teaching kitchen, and additional retail spaces facing Broadway. Alice says on the remaining acreage they are working to recruit other partners who can address health-related needs, such as a grocery store, pharmacy, or workforce development and education resources. Alice says the area has suffered from decades of disinvestment and redlining. “This will really create a destination in West Louisville.”

And, just to stay on our April Derby Prep Theme —  Here are the Top 5 Things Alice Loves About Derby