You Can Be a Good Speaker

You Can Be a Good Speaker

Treat them like friends around the dinner table and other things you can do to help make your speech memorable.
By Marie Bradby


Public speaking: Yikes! It can make even the toughest corporate executive weak at the knees. Whether it’s speaking at a team meeting, an industry conference, or a community event, many of us get nervous and tongue-tied in front of an audience.

Enter stage right — Madison Cork, an accomplished Hollywood actress, an adjunct professor of communications, acting, stage combat and voice, and president and founder of Cork Communications, which focuses on coaching executives and their teams to speak effectively.

“When business people are called to stand and deliver, they don’t know how to tell stories,” says Madison, who teaches in the theater departments at Bellarmine University and the University of Louisville. “I had this unique ability to tell stories really well, and to see the power it had on other people.”

Before relocating to Louisville in 2010 to raise her family, Madison worked for a decade as an actress in Los Angeles.

She garnered numerous awards as the lead in the play Agnes of God, co-starred with Tony Danza in another theater piece, and was part of the cast for The Princess Diaries 2: Royal Engagement with Anne Hathaway and Julie Andrews.

“I was one of the lucky ones brought to Los Angeles by a casting director when I was in my early 20s,” Madison says. “It doesn’t happen often. He saw me performing in a theater in Vancouver and invited me to work in LA. I won the LA Drama Critics Award and Ovation Award for Agnes of God, and my career skyrocketed.”

In her coaching business, which she launched in 2013, Madison’s corporate clients include Yum Brands, Humana, Brown-Forman and GoNoodle in Nashville.

“I quickly realized there was a missing link,” she says. Employees had the marketing materials but didn’t know how to deliver the story.

“I told myself: ‘Madison, you can teach people to be fantastic presenters. It would be a viable company to form. I was blown away by the response I got not just in Louisville, but nationally. Here I am three years later. I have clients in six states. I travel to be with these corporations and turn their executives into phenomenal presenters. These are the most highly intelligent people in the world who have great ideas and run a business day in and day out. I give them the ability to tell great stories. It’s so rewarding to me.”

Madison’s approach to speaking is linked to storytelling. Imagine you are at a dinner party, she advises, and everyone around you is sharing portions of their lives — the challenges and rewards in their work and home life. “We are great speakers at that moment because we are engaging people in what we are doing,” she says.

“I get clients to stop thinking about public speaking as this robotic thing they have to do to get information to people. The audience members just want to hear you tell a great story about your business.” 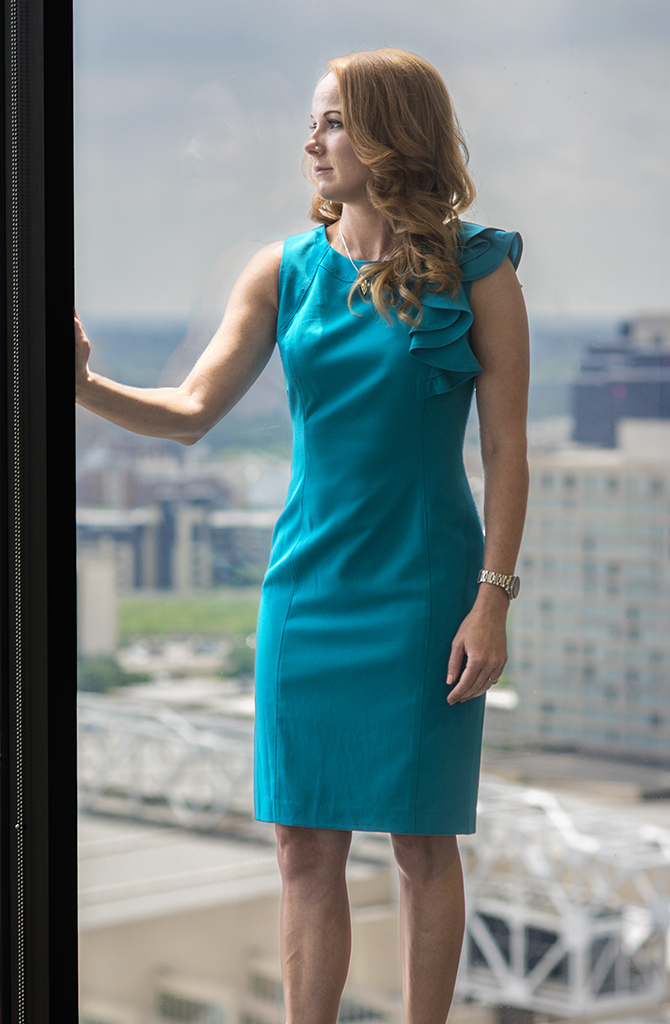 Pick one central idea. “The biggest decision for a speaker is where to start and where to end. Be considerate of what people in the audience already know. The best speakers do a magnificent job of quickly introducing their central idea, explaining why they care about it, and convincing the audience that they should, too.”

Avoid filler language. “When we stand up in front of people, we go into this place of fear and stop listening to ourselves and try to buy time with filler language—‘uh,’ ‘um.’ Speakers need to slow down so their brains have the space to find what they want to say and how they want to say it. Listening to yourself and giving yourself time to think will eliminate ‘uh’s.’”

Pare down the details. “In written communication, we tend to overburden our reader with too much detail. People are extremely busy; they need information in a concise manner. ‘Here is what I am looking for, and here’s what I need from you.’”

Tell a relatable story or anecdote. “Stories and thought-provoking ideas fascinate the listener. Systematics and organizational structure bore us because, at our core, we want to relate on an emotional level. The use of imagery to tell the story provides a successful platform for the central idea to shine.”

Make data memorable. “Your organization’s data is a goldmine of inspiring human moments that made those facts and figures relevant. Humanize your data.”

Plan and rehearse. “Jot down your outline, making sure your central idea is the through line. Then, practice speaking it aloud. Correct yourself as you rehearse so you don’t do that when you deliver.”
Talk to your audience, not at them. “Reading a prepared speech quickly disengages you from your audience. It creates a formality that makes listeners uncomfortable. Instead, treat them like friends around the dinner table. Make eye contact. Be open to the unexpected and be part of the conversation.”

Be aware of your body language. “Often people move their heads too much, or over-gesture, or shift from side to side. These motions can be distracting and undermine an otherwise great presentation.”
Do you dread public speaking? How do you calm yourself down right before a speech?