A duck, a sheep, and a rooster were in a hot air balloon…

Unfortunately, there isn’t a punchline to this true story of the first unmanned balloon flight in 1783 in France that lasted eight minutes and covered two miles before the unlikely passengers landed safely on the ground. Since this successful flight, human passengers have been enjoying the graceful glide of hot air ballooning in the colorful giants that have become a symbol of the Kentucky Derby Festival.

The U.S. Bank Kentucky Derby Festival Great BalloonFest is one of more than 70 events that preludes the most exciting day in horse racing. “The BalloonFest is made up of five main events,” says Anna Miller, events manager at the Kentucky Derby Festival and the person responsible for making this event a success. “Thursday morning, April 28, is the Charity Balloon Race, which is new this year. That evening on the Waterfront is the Glimmer, which is a mini-glow. Friday morning is the Rush Hour Race followed by the Balloon Glow that evening. Saturday we conclude the events with the Great Balloon Race.”

The races launch from Bowman Field at 7am with the public entrance on Pee Wee Reese Road, but the Balloon Glow lights up the night at the Kentucky Exposition Center. The community flocks to these events to witness the elegant way the balloons lift and carry themselves to the finish line and the harmonious glow that cuts through the night. But what is unseen is the preparation that goes into getting these events off the ground. “We start recruiting balloons in early fall, and after the new year, we really start getting into the entertainment, the merchandise, and planning out meals,” Anna says. “Most of our balloons have been participating in this event year after year, and some pilots have sponsors on their own, but we also work with companies who are looking to participate that don’t have a pilot or a balloon. We have a program to help find a pilot and a balloon for them as well as create signage for the business.”

Anna focuses on making sure the pilots and sponsors have all they need so the event runs smoothly. “I oversee all the ballooning events, and I also have to plan two luncheons, two nights of hospitality, and a dinner,” she says. “I also oversee the pilots and sponsor representatives’ hotel stays, meals, merchandise, and propane because the pilots have to refuel after each event. For the attendees, I have to think about concessions, restrooms, entertainment, and what the venue looks like when they walk in. It needs to have ease of access.”

The five behind-the-scenes feasts include the position draw luncheon, awards luncheon, fuel up dinner, and two nights of hospitality. “The position draw luncheon is where the pilots play a game to choose what position they will be in for the Glow,” Anna says. “The awards for the Rush Hour Race and the Great Balloon Race are given at the awards luncheon. We also give awards to balloons for every five years of participation, and we have some balloons that have been in the event for more than 40 years. 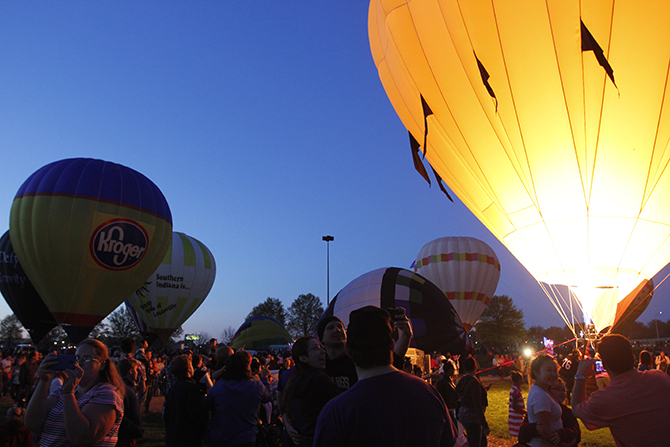 “The fuel up dinner is right before the Glow. The pilots have to set up early before the community gets there so that trailers are not coming in while people are walking around, so we provide a dinner at the Crowne Plaza. We set up a hospitality room with games and food from Jimmy John’s and White Castle. We try to create a nice atmosphere for them to hang out since a lot of pilots are from out of town.”

The crucial aspect of all these details is the short time frame in which the balloons can fly. “Balloons can only fly two hours before dawn and two hours before sunset,” Anna says. “This is why before the race we have our first meeting of the day at 4:30 in the morning. It is a closed door safety meeting to talk about the weather and what direction the wind is in before we meet with the pilots at 5:30am.” 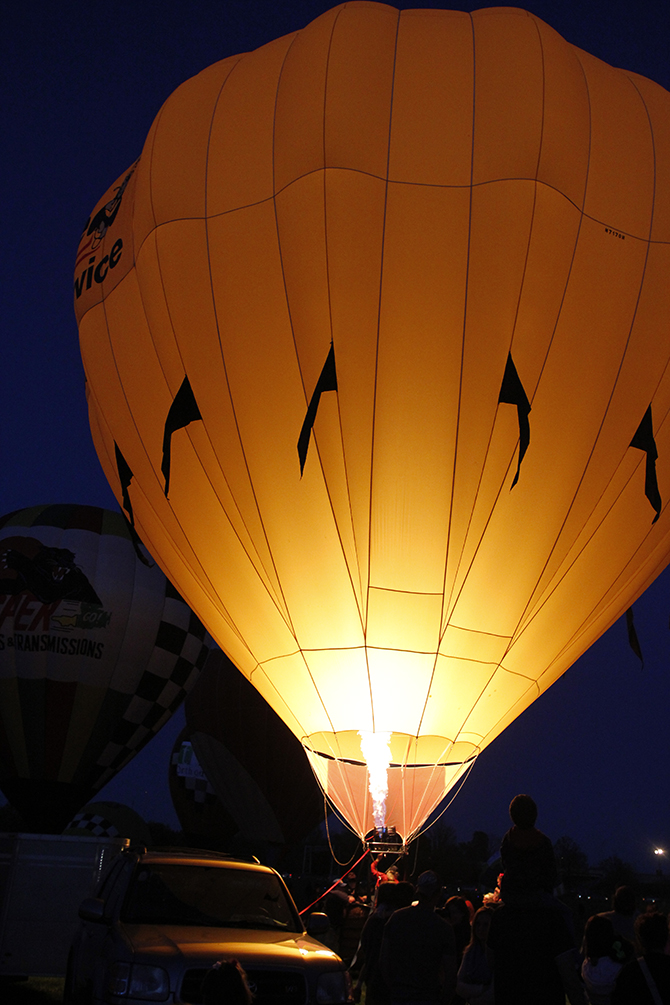 Weather conditions for ballooning are best at these times of the day because the winds are light at zero to eight miles per hour. When the sun is high during the day, large bubbles of hot air rise from the earth, making ballooning hazardous because pilots have little control over the direction the balloon will fly. A balloon drifts in the same direction and speed as the wind, so a pilot has to pick the altitude that has the most desired wind direction. For the same reason, it is not possible to pinpoint the exact landing spot for a balloon, but the pilot is able to determine the general direction of the flight based on wind currents. The pilots also have a chase crew that follows them with maps, radios, and visual contact so they are able to help disassemble once the balloon has landed.

Knowledge of ballooning has came a long way since that odd combination of animals took flight, and every delicate detail of this science goes into making the Great BalloonFest a wonder to behold. As the balloons travel over your morning commute this Derby season, remember that their effortless float takes perfect timing and skill. And perhaps be on the lookout for flying sheep.