Please Can I Have a Horse?

Please Can I Have a Horse?

When she was growing up, Courtney Spiegel asked her parents every year for a pony for her birthday. She’d been riding since age 5, mostly doing show jumping and working with a trainer. She finally got her wish for her very own pony on her 14th birthday, though her new pet was larger than she’d anticipated. She was now the proud owner of a Thoroughbred horse appropriately named Awesome.

“When I got Awesome, he was fresh off the racetrack,” Courtney says. “In his day, he earned almost $30,000 in racing. He has even raced at Churchill Downs.”

A Louisville native, Courtney recently moved to Columbus, Ohio, for a short while to take a job with the city’s professional ice hockey team, the Blue Jackets. She was able to take Awesome with her and lived there for two-and-a-half years. “I rode Awesome more just for fun while in Columbus,” she says. “We did trail riding and were able to spend some good time together. Also, I was taking lessons again. My trainer pushed me to step outside of my comfort zone, and things got hairy. That’s when I had my accident.”

It was almost exactly a year ago. “I was jumping on a different course with bigger jumps at the time, and I went for the last jump when Awesome got too high and bucked me off,” Courtney says. “I blacked out for about 45 minutes and was taken to the emergency room.”

She was wearing her helmet, but Courtney still dealt with concussion issues for months after that. “I’ve fallen off Awesome several times before — it’s part of the sport,” she says. “But this was the first time I had fallen off and wasn’t able to get right back on, which was really hard for me mentally.”

Ten days after the accident, Courtney did get back on Awesome, and she was able to do a show three weeks later. “Doing the horse show was good to help me move past the accident mentally,” she says. “We ended up winning reserve champion in our division of classes, too!”

Now back in Louisville, Courtney is the special events coordinator in the University of Louisville alumni relations and annual giving office. Awesome is also back in Louisville and is “the fattest, healthiest, and happiest he has ever been.” Courtney treats Awesome to lots of loving, grooming, and of course, carrots. “I’ve had him for 11 years now, and we both really know each other’s personalities. He’s a sweetie, just like a big dog, pretty much.”

Owning a horse comes with a big investment of expenses and time, but Courtney knows how therapeutic it is for her to spend time with Awesome. “He’s such a calming companion. Since I’ve had him from such a young age, that bond we have is so special to me.” 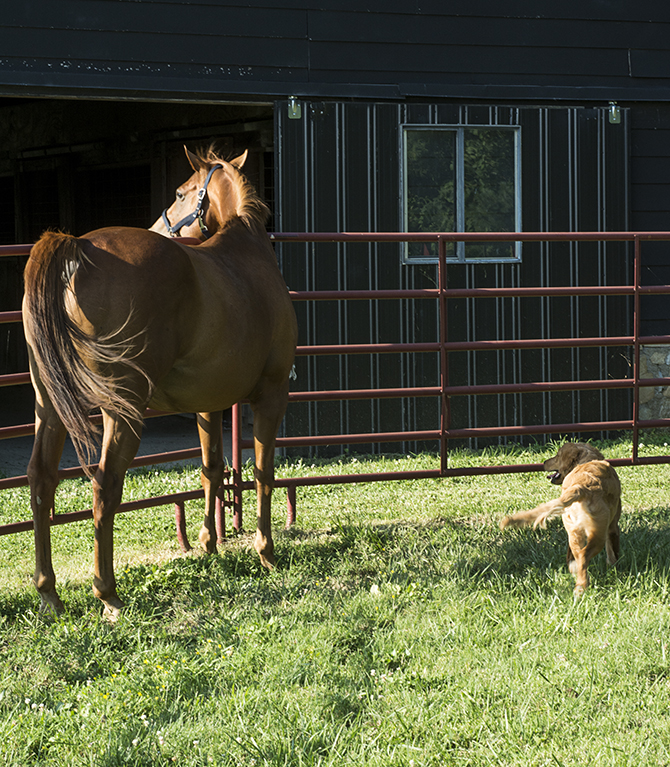 Awesome is now at Aspiring Heights Equestrian Center in Prospect, where he and Courtney take leisurely rides near Foxhollow Farm and spend time with her new puppy, Murphy, a 7-month-old Golden Retriever.