It’s not uncommon these days to change career paths. You might think you’ve found your calling only to discover and pursue a completely different passion. To integrate them both into one amazing super-career? That’s rare. But Jodie Tingle-Willis made it happen.

By middle school, Jodie knew she wanted to pursue a career in a helping profession. With the guidance of her mentor and high school counselor, Cheryl Gilley, she attended Spalding University, where she earned her degree in psychology in 2001. She worked throughout college and became a licensed therapist in 2004 after graduating from the University of Louisville with a Master of Science in social work.

It didn’t take long for Jodie to realize that taking on the problems of others can be draining. “A couple years after starting, I knew I needed to take care of my body,” she says.

In 2005, Jodie started attending yoga classes. A few years of notable improvements in her mental and physical health prompted her to commit to yoga teacher training in 2008. “I wanted yoga to remain a priority in my life,” she says. By 2009, Jodie wanted to put her training to the test, and she already had a demographic in which to find her clientele. She reached out to her co-workers in social work. “Seeing the change in stress level from the start of class to the finish was like night and day,” she says. “I didn’t realize how big a difference I could make.”

Jodie decided to focus solely on yoga instructing in 2010. At first, she was trekking across town working with different studios until mid-2011 and doing more driving than actual instructing. Her husband suggested converting a couple of rooms in their house into a yoga studio. “It was through this process that I fell head over heels for the people in (the Beechmont) neighborhood,” Jodie says. “I had never taken the time to meet my neighbors before.” The Beechmont neighborhood where Jodie lives is a melting pot of young families, the elderly, and foreign refugees who are receiving aid from the nearby Americana Community Center, Inc. 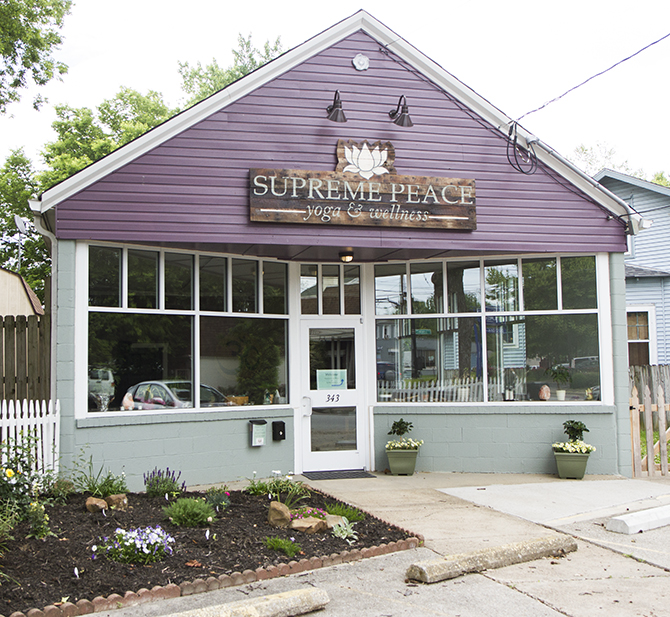 For four and a half years, Jodie provided classes for her neighbors and co-workers who didn’t want to make the trip to other yoga studios, all the while looking for a permanent location to land her business. In 2014, a married couple bought a space near Jodie’s neighborhood with the intent of filling it with a business that would benefit the community. Jodie was their ideal tenant, so they collaborated with the new layout of the space. “The building was a hollow shell,” Jodie says. “The construction was really a community effort.” She had her business, Supreme Peace Yoga & Wellness, up and running by September 2015.

Supreme Peace Yoga offers different styles of yoga in order to accommodate the diversity of Jodie’s clients. “Yoga is for anyone — especially people looking to de-stress or increase contentment, joy, and connection in their lives,” she says. “We love beginners at Supreme Peace.” There’s chair yoga for clients with knee or hip pain, or Hatha yoga that focuses on correct alignment and deep relaxation. Yula combines yoga with the hula hoop.

But it’s not the classes that guarantee a memorable experience; it’s Jodie’s eagerness and accountability to stick up for populations that would otherwise be forgotten. People with physical limitations or who have experienced trauma, veterans, and even children are encouraged to participate. “That’s what sets our training apart,” Jodie says. “We try to find a population who may need our classes more than others. They’re geared toward underserved populations. In the video below, Jodie demonstrates a simple relaxation technique.

“Many people think they are too ‘_______’ for yoga. You could fill in the blank with old, stiff, or big. None of that is true. There are yogis in their late 90s, paraplegic yogis, big and small yogis.”

With a fellow mental health therapist, an occupational therapist, and a pediatric nurse in her arsenal, Jodie is well-equipped to take on the struggles of others. She is taking it upon herself to make her corner of the world a better place.

Have you ever tried yoga? What is your fitness routine for staying healthy?