In a neighborhood filled with traditional homes sits a 3,000-square-foot contemporary gem polished by owner and architect Ana Nouri. A few years after relocating from Argentina to Louisville, Ana married and moved into the home her husband had built in the ‘80s.

With a baby on the way, Ana didn’t waste any time applying her architectural expertise to transform the dark, one-story home into a two-story abode saturated with natural light.

“We took out the hallway and opened up the first floor,” Ana says. “Then we added floor-to-ceiling windows in the front room and floor-to-ceiling doors off from the kitchen. This allowed a lot of light to come in, and the windows off the kitchen really brought the outdoors inside.”

Needing more space for her growing family, Ana decided to add a second floor instead of an addition. Because new foundation wouldn’t have to be poured, adding a second floor was not only less expensive than creating an addition, but it also allowed her to set the stage for the focal point of the house. “We wanted a staircase that was open, that wasn’t closed in, and that allowed the light to fill the room,” Ana says.

Once the second floor took shape, a spectacular view of Big Rock in Cherokee Park that was hidden from sight from the first floor revealed itself. Ana kept the natural light flowing through the second floor by adding floor-to-ceiling doors off the office that frame the beautiful view. “We built a balcony off the office with the intentions of having breakfast out there, which we haven’t yet but maybe one day,” Ana says.

Contemporary-Zen style is how Ana describes her decorating preference. This style shows throughout the home with the uncluttered white walls and ‘60s-inspired furniture, including a Noguchi table that Ana says people might find similar to one in the television household of the Brady Bunch. 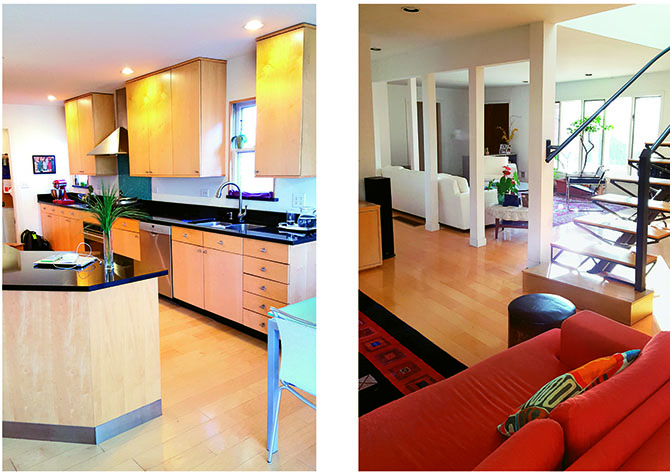 Though there may not be many pictures on her walls, Ana has striking art elsewhere. “I don’t like a lot of things on the walls,” she says. “Instead, I have the Afghani rug — because my husband is from Iran — in the front room and a pure silk rug under the stairs. So, I guess you could say my art is on the floor.”

In a world so loud, Ana wanted to create a serene space her family could relax in. With the brightness of the outdoors creeping in and the floating staircase leading to a picturesque view, Ana has designed the ultimate Zen experience.