How Leftovers Can Change Your Life

How Leftovers Can Change Your Life

One would be hard-pressed to find a woman whose Turning Point pivoted on a can of leftover paint. But Catherine Clore is that woman.
By Lucy M. Pritchett 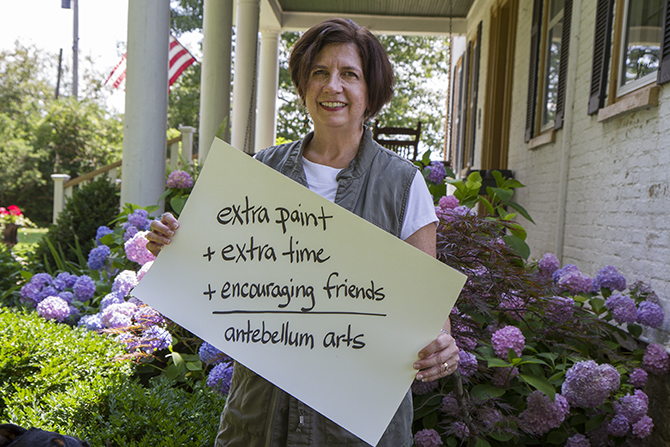 Cathy lives in a historic farmhouse in Goshen that has been in her husband’s family since Kentucky was still part of Virginia. “The house was built in the 1830s and is made of bricks of the clay that came from the riverbank,” she says. “The wooden floors came from the trees on the land. The bricks were laid using no mortar but are held in place with mud, straw, and hog and horse hair. Because there is no mortar, we have to keep the bricks painted.”

In 2010, the Clores had scheduled to have the exterior of the house painted when Cathy lost her job with an event planning company due to downsizing. Since that meant the family income was cut in half, she bravely decided to take on the job of painting the two-story house herself.

“It was quite an undertaking,” she recalls. “We had no scaffolding, and at times I found myself hanging off the roof or balancing on the top of ladders wielding extension poles. At one point we rented a box truck, spread a tarp on the top, and used it as scaffolding. By the time the job was finished, we had used 56 gallons of paint.”

In a moment of inspiration, Cathy had the idea to use the leftover paint to create a wooden barn quilt to hang on the nearby smokehouse that would tie it and the house together. “I had seen a barn quilt on my way to Madison, Indiana, years before this and thought it was a great idea,” she says. “I’ve wanted one ever since then. Now was my chance. I created the barn quilt using the leftover white and tan house paint and a deep forest green paint that we had used on our Adirondack chairs.”

Cathy admits she had no art training in high school or college — “I was a band geek and have an English degree” — so this was a whole new area for her. Her husband, Rob, cut a 4-foot by 8-foot sheet of plywood in half, and she got to work. Once that barn quilt was completed, she used the remaining 4-by-4 sheet to create three other quilts and posted the photos on Facebook. A friend who lives in Missouri and owns an alpaca farm saw Cathy’s creations and ordered one for her own barn.

And that was the beginning of Antebellum Arts. By 2012, Cathy had enough barn quilts completed to hold a booth at the Butchertown Art Fair. She also displayed and sold her quilts at Oldham County Days, and for the past three years, she has participated in the Arts on the Green festival in LaGrange. In addition to the ones she designs, she creates custom barn quilts based on client specifications.

“Most of the barn quilts I have painted are based on traditional quilt patterns,” she says. “Sometimes, though, someone will ask me to recreate the pattern from an antique quilt they own. Once, I created one with a nautical theme for a couple who own a boat.”

Cathy designs the quilts on a drafting table set up in the music room of the house using a compass, triangles, and straightedge. A repurposed gun cabinet with glass doors holds her paints and stir sticks.

“I reuse the stir sticks until they get so thickly covered in paint that I eventually have to throw them out,” she says.

So far, Cathy has painted more than 160 barn quilts ranging in size from 4 foot by 4 foot to 6 inches by 6 inches. It takes an average of two weeks to complete one, and prices range from $25 to $300-plus depending on the size and design.

The moral of this story: Don’t be so quick to discard that can of leftover paint. You never know where it might take you.