Linda Priddy had a heart attack 16 years ago. A blood clot formed at a stent that had been inserted in a blocked artery three months earlier. The damage caused her to lose one-third of her heart function. At age 74, Linda has heart failure and angina, which causes chest pain and pressure. “When I walked, especially going uphill, I had pain and would stop to rest maybe two to three times,” Linda says. She also took nitroglycerin at night since chest pains woke her up.

In November 2015, Linda began attending the Dr. Dean Ornish Program for Reversing Heart Disease at KentuckyOne’s Healthy Lifestyle Center at Jewish Hospital Medical Center Northeast. “I have not woken up with chest pains since I was seven weeks into the program,” Linda says. She had read an article in a Louisville paper about the Ornish program and talked to her internist, Cathleen J. Morris, M.D. “Although she wasn’t familiar with it, she got really excited and wrote a referral for me,” Linda says. After a qualification interview, Linda enrolled with eight other participants, meeting twice weekly in four-hour sessions. 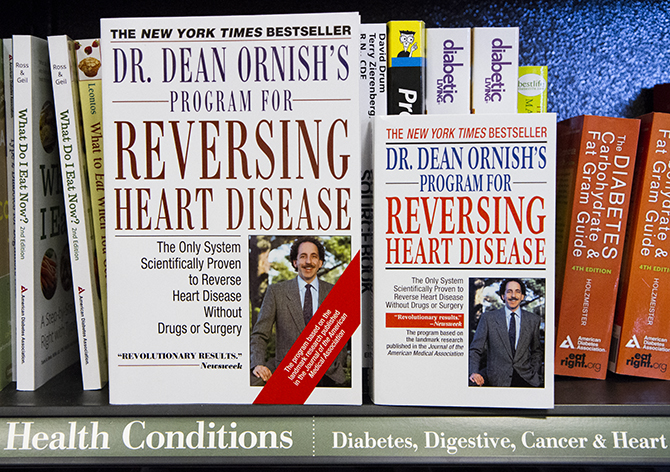 During the nine-week program, Linda learned about a heart-healthy diet, exercise and stress management. “Changing your diet is the most challenging part,” Linda says. “I have to have six helpings of whole grains daily, but I’m not a big eater.” The diet totally eliminates oils and animal fats. The only fats Linda is allowed are from soy milk. She eats meatless versions of hamburgers, hot dogs, and chicken nuggets.

“My husband, Wildon, is eating a lot of food on the Ornish diet with me,” Linda says. “Sometimes I’ll fix a steak or hamburger for him.” Since Wildon is on a gluten-free diet, they can both eat whole-grain pasta without gluten. “When we go out to eat, which is often, I have a lot of salads,” Linda says.

Exercise is foremost in Linda’s life. She goes to the gym three times per week to use the treadmill or bicycle and lift light weights. She includes stretching in her routine. “Exercise is truly beneficial, and I find that I have more energy,” Linda says. “I’ve lost 15 pounds, and my body mass index (BMI) is down to the normal range.

“One of the vital things that I’ve learned is to relieve stress,” Linda continues. “I do meditation and yoga at least one hour per day.” She’s practiced yoga either at home or in classes for many years and loves it. “The meditation is new to me, and it does help to clear myself of stress.”

Since completing the program, Linda meets every Tuesday with her core group. “It’s a big part that keeps you on the diet, exercising and managing stress,” Linda says. “We do it on our own, so we help each other with problems. You have somebody at your back, and everyone is glad to see you and support you.”

Linda is monitored by her internist, Dr. Morris, every three months. “My cholesterol is now 133 with medication and the Ornish diet,” Linda says. “Last November it was 340.” Linda isn’t alone in seeing positive results — others in her class have received good news from their doctors. She’ll see her cardiologist in June, but she wishes it were sooner. “He’ll want to do some testing, and I’m anxious for him to do that,” Linda says. “I hope that he can reduce my heart medications.” Linda’s daily regimen includes two prescriptions for her heart, a blood thinner, and one for angina. She also takes vitamins, CoQ10 and fish oil as part of her heart-healthy diet.

“My mother passed away at age 76 from a heart attack and stroke,” Linda says. “I have two daughters, a son, four grandchildren and two great-grandchildren. I’m trying to set an example to show them how truly beneficial it is to take care of your heart.” She hopes that others will learn to prevent heart disease before there is permanent damage. “I’d like people to realize they have options,” she says.