For the Love of Llamas

For the Love of Llamas

For the past 17 years, Debi Sue Aven and her family have lived off a small winding road in Georgetown, Indiana, on a farm with the prettiest of green views. She and her husband, Mike, have three daughters and a son and seem to lead an ordinary life. What’s not so ordinary, though, is that they own, breed, and board llamas and alpacas. What’s even more fascinating is how she is allowing the animals to connect to others.

It all started six years ago when Debi Sue saw some llamas at a county fair. She decided right then that she wanted to make the venture into owning these animals. She immediately got to reading and researching, and she talked with Floyd County about starting a llama club for the area. An extension educator encouraged her and helped her through the process while looking at other counties’ llama guidelines in order to adjust them to fit their Floyd County 4-H needs. A few alpacas were donated to help Debi Sue get her club started, but she still really wanted a llama. And that is exactly what her husband gave her for Christmas that year.

Debi Sue now has 19 llamas on her farm, eight boarded and 11 llamas of her own. She explains that llamas are originally from South America and are one of the world’s oldest domesticated animals. “They were originally used as villagers’ pack animals,” she says. “The Incas also used llamas for their fibers.”

“They’re great animals — they are majestic. I also feel they are truly stress-relieving animals to be around. I think a lot of people give them a bad reputation about spitting and kicking, but that’s actually pretty rare. While most llamas will walk toward you initially, they are not overly affectionate right off the bat. However, they are really great to work with, and it is easy to gain their trust.”

It’s where Debi Sue takes her llamas that is the most intriguing. She and her llamas visit nursing homes and schools every year. “We take the llamas to these places and talk about them, let the kids or older folks touch and be near them,” she says. “We visit rooms in the nursing home and teach the kids about animals. It’s great socialization for both the people and the llamas.”

Debi Sue started a 4-H club in which children in kindergarten through grade 12 can interact with the llamas: Bailando Llama & Alpaca 4-H Club. Currently, she guides about 20 children who either lease or own their own llamas. The children practice showing the llamas for events at the Floyd County Fair. “The kids come out to practice showmanship (how well you present the animal) and getting through an obstacle/ performance class with their llamas,” Debi Sue says. The obstacle classes include a freestyle class where they practice jumps, weaves, tunnels and the like. Next is the pack class where the llamas are judged on how well they maneuver through things you would find on a nature trail — for example, they might walk through water, over a bridge or step over branches. Lastly, there is a public relations class where the animals are observed on how well they respond to public occurrences such as being petted, noises, or even wearing a party hat.

“There is a costume contest that the children participate in with their llama. One year, my daughter was Alice in Wonderland, and her llama was the Mad Hatter! When they are being judged, the judges look at creativity, how much of the llama is actually dressed or covered with costume, and how well the animal reacts to being dressed up.”

Some of the children in the club have different disabilities, and Debi Sue gets quite emotional when she talks about how rewarding it is to see these kids developing a bond with their llamas and doing something they enjoy.

“I would say the most rewarding part of owning llamas and getting to do this is really just building your relationship and trusting bond with the animal,” she says. 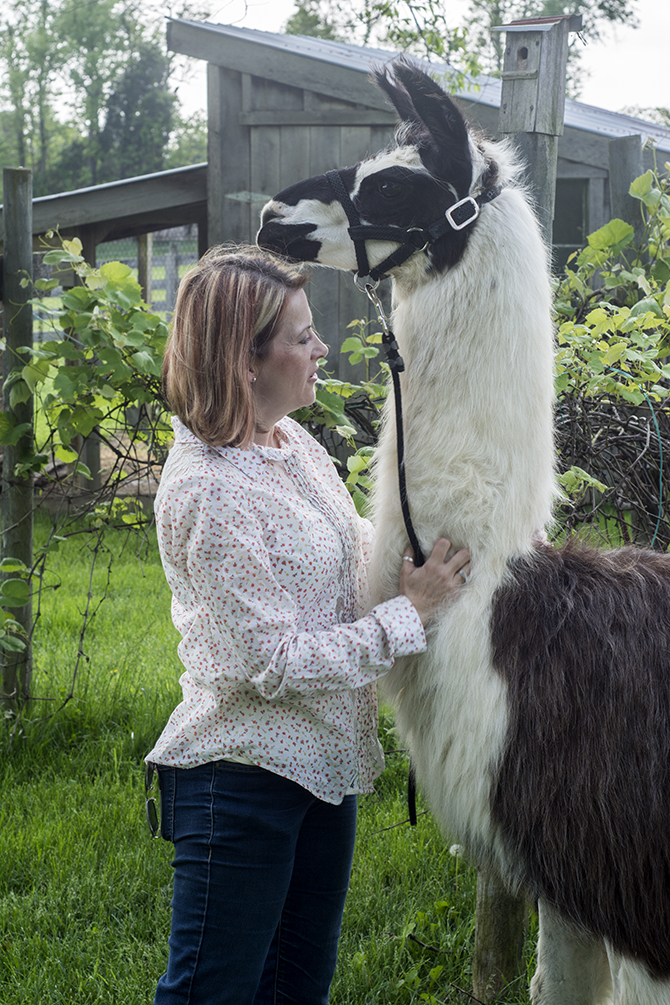 Would you ever own an exotic animal? Do you know anyone who does?