Don’t Make These Mistakes for Your Derby Party

Don’t Make These Mistakes for Your Derby Party

We talked to Susan Hershberg, owner of the Wiltshire Pantry Bakery and Cafe on Breckenridge Street in the Highlands, Wiltshire on Market in NuLu, and the new Wiltshire at the Speed about hosting Derby parties. She says most people make one common mistake.

What’s new that still says Derby? What’s new for us is that we now know all of our producers. We always had country ham on buttermilk biscuits. Now, we know who produced our ham and who milled our flour. Everything is artisan made. We still have to serve the classic Benedictine spread, but on homemade pumpernickel bread instead of white bread. Or topped with house-cured rainbow trout that’s been locally sourced. We pay attention to trends in diet and diet restriction, such as vegetarian and gluten-free options. Instead of serving pasta salad, we are serving quinoa salad. Instead of serving a Hot Brown on bread, we would serve it on a potato crisp. Or a beef tenderloin on a plantain crisp to keep it gluten free. We incorporate them into the regular meal.

Common mistakes hosts make? They think they need to serve the same thing every year. It’s not that people don’t love what you served last year, they will embrace something new. Also, hosts don’t plan far enough ahead, so they don’t get to relax and enjoy themselves.

Yes, the Wiltshire cafe is open at the Speed Art Museum — and our writer Marie Bradby stopped in for the recent soft opening. 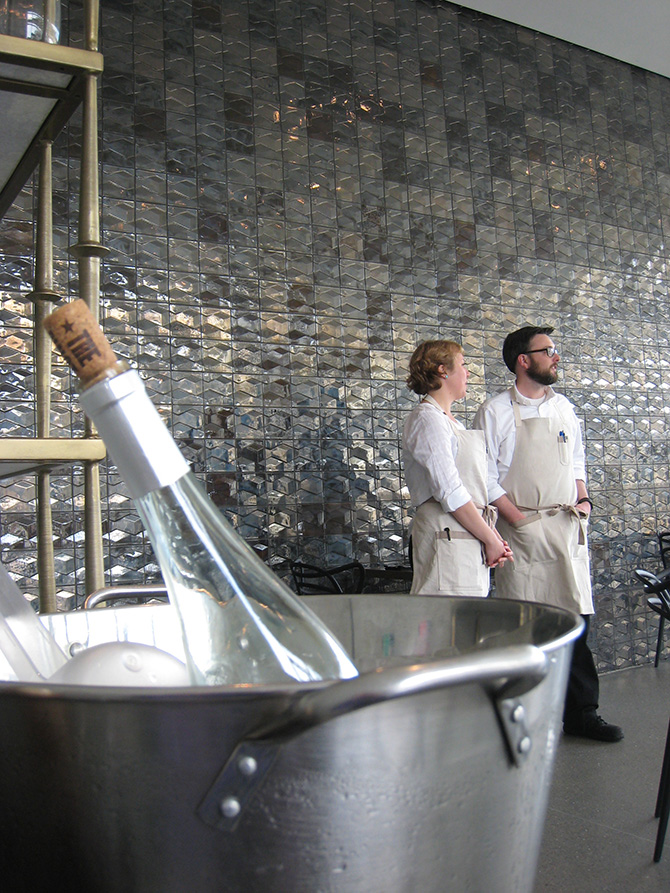 To give her servers and cooks time to get acclimated, Susan Hershberg had a soft opening recently for the much-anticipated Wiltshire at the Speed, a two-story glass jewel box set against a backdrop of iridescent mocha-hued wall tiles and floor-to-ceiling windows. Friends and family—including Susan’s mother, Roberta Hershberg (Bell Award winner for her educational and international outreach work)—and lucky passersby dined in Louisville’s latest modern dining space. Expect great things to happen with the official opening. I had an artful and delicious soup and salad combo: a roasted pear atop a bed of fresh arugula, shaved celery and Parmesan and roasted chickpeas. The white chili soup with beans and chicken had a rich mix of flavors and was topped with a chive crema and served with fresh plantain chips.

What’s the best advice you’ve been given? Don’t borrow more than you can afford to pay back. I was always cautious about the way I expanded my business. When I opened Wiltshire on Market, I got another METCO loan to put in the kitchen. But I also needed heating, air conditioning, and dishes, so I maxed out a credit card with zero interest to pay down in 14 months. It was tight. I worked that cash flow every week. It’s about paying attention to the numbers. Until two years ago, I did my books myself. I write and sign every check myself. You have to pay attention to the amount of money coming in and the money going out. Don’t buy anything you don’t need. The other advice is never get behind in your taxes, even your sales tax. You collect it all month long, and turn it in the 20th of the next month. People who get behind are often unable to recover.