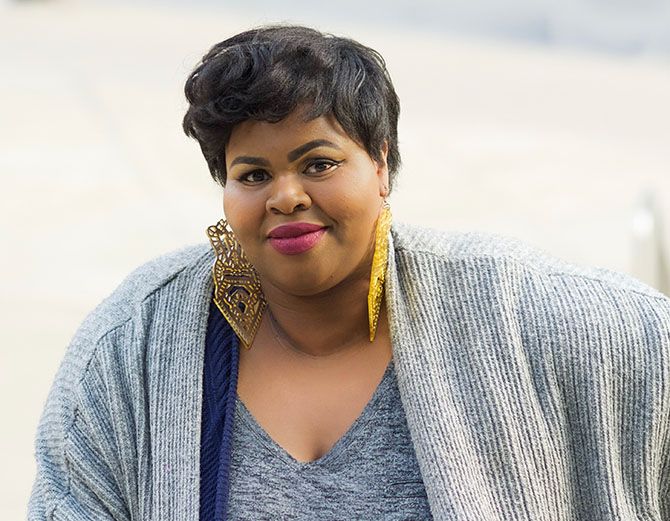 Finding Strength in a Verse

Rheonna Thornton is giving women the power to use their voice — and words — in a way that is transformative. A connoisseur of language, Rheonna is celebrating the sixth anniversary of her Lipstick Wars Poetry Slam, which is a spoken word competition, but it’s about more than competitors showing their linguistic prowess.

The idea for Lipstick Wars came from hearing negative comments from some male poets at other poetry slams. “There would be a lot of comments made by men who would say things like ‘oh great, another bitter Black woman poem,’ and I would be one of very few women in these spaces,” she says. The criticism prompted Rheonna to start her own poetry slam to give women and girls a platform for expressing their thoughts on events that have shaped their lives. “I thought why not create a safe space where a woman can come up and say ‘I was divorced or I am a victim of sexual abuse…whatever it is, you can voice it in your poem without feeling judged by someone…”

Now, she is building off of the success of Lipstick Wars. She teamed up with nationally known poets and professors at Spalding University to start Lipstick University, scheduled to debut in January 2022. Its purpose, she says, is to be a launching pad for writers who want to become better at their craft. The program offers free creative writing workshops for poets of color who want to learn how to structure a poem, write a poetry book or perform in front of others. Rheonna also hopes to expand her reach by providing scholarships to college-bound girls who are interested in literature. “I want to be able to provide residency for poets. It means so much to me be able to do this because even when [COVID-19] happened, people reached out to the artists. It was the words that got people through; it was poems that got people through, it was songs … By providing this platform I am awakening a spirit and breathing life back into the city.”