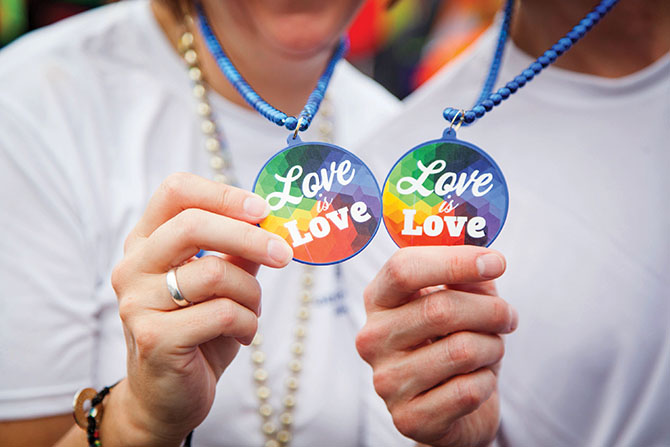 The Pride Parade kicks off the two-day Kentuckiana Pride Festival, which takes place this weekend at Big Four Lawn, Waterfront Park. The festival will be putting COVID-19 restrictions in place for the safety of participants.

Organizers of the Kentuckiana Pride Festival are building on the greatness of a longstanding tradition.

From the seat of her golf cart, Mary Radcliffe witnesses the miracle of a rainbow. Actually, more like 1,000 rainbows, raucous and lively, diverse and divine, snaking their way toward the Big Four Lawn.

For the past six years, Mary and her Co-chair Chad Eddings have brought up the rear of the Pride Parade, an event that kicks off the two-day Kentuckiana Pride Festival, Concert & Parade. The countless colorful floats, the thousands of enthusiastic participants dancing and smiling and waving signals of support to a sea of allies along the sidewalk, make light work of the months-long tedious tasks of organizing, budgeting, and attempting to line up a thousand people. As the parade rounds the corner from NULU toward the Waterfront, that is when Mary feels the most pride in her community.

“It’s my baby,” Mary says. “We stage 1,000 people: 10-15 churches, sponsors, bars, corporations. We start at 4:30pm in order to line everyone up for the parade at 7pm, but when you see the enthusiasm and support of teenagers, straight couples and families come together to create such an inclusive and accepting environment, it is overwhelming.

“Twenty years ago you wouldn’t have seen so many young people in their teens and 20s able to express and be themselves. You wouldn’t have seen the support from such a wide range of allies, either. The inclusion and support you witness is hard to put into words,” Mary says.

And just like that, with the crash of the cymbal from the Gay Marching Band, the Kentuckiana Pride Festival begins. 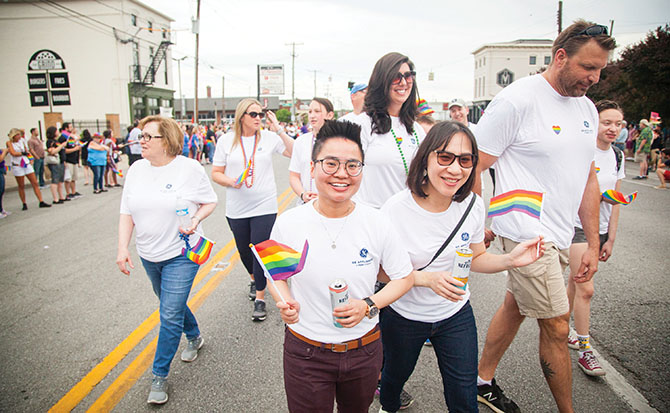 The annual Pride Fest — October 8-9 on the Big Four Lawn — is a celebration of diversity that also includes two days of vendors, live entertainment, food and beverage, and a kid-zone.

Like most events in 2020, the KFP’s celebration was stymied by the pandemic, but this year, with its new, later October date, the two-day festival is on its way to being bigger and better than ever, with hopes that the cooler weather will be more conducive for families and the elderly.

Rodney Coffman, Kentuckiana Pride Foundation president, says this year’s entrants into the parade have already surpassed all years prior. Vendor spots are sold out, the entertainment lineup is better than ever before, and as long as the festivities aren’t curtailed by the Delta variant, they are on the mark for having a record crowd in attendance. Over the past 20 years, Rodney has watched the event grow and become ever more inclusive. The parade, he says, used to consist of less than a hundred people and be just a block long — “It ended before it even got started.” Now there are more than 1,000 entries and floats from sponsors like Kroger, Tito’s, Four Roses, UPS, and Yum Brands.

“After a year and a half of Covid, we wanted this event to celebrate our ability to hang-on and surpass and come together, LGBTQ-related or beyond. We all need this to show that we’ve survived,” Rodney says. 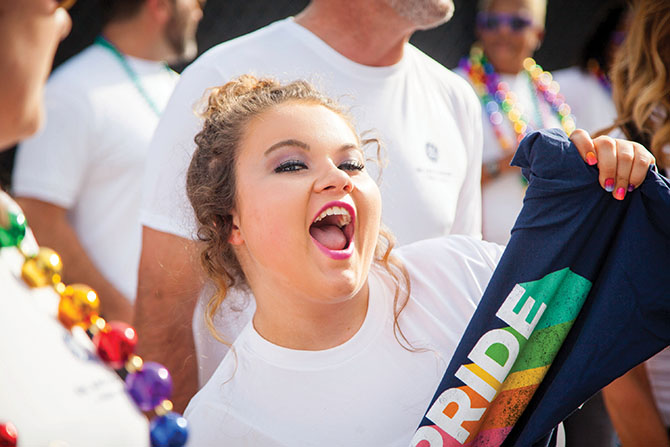 Dawn Wison, staple and long-time organizer of the Fairness Campaign, says that getting back together and seeing familiar faces from Louisville as well as participants that come to the event from out of state is what she is most looking forward to this year. Besides the impressive entertainment lineup of Spinderella, Neon Trees, Todrick Hall, an 80’s pop sensation Tiffany, among others, Dawn is most looking forward to the human connection after so long away from her community.

Like Dawn, Mary has also facilitated the event in many ways throughout the years. Before becoming parade co-chair, she also served as a volunteer and later as the event’s treasurer. “I got involved through friends. I was a single mom and working on my accounting career, so I joined as a volunteer then served as treasurer for four years. Sitting on the budget committees now is much different — I think this is the first year we might actually turn a profit,” she says with a raspy laugh. “It takes a lot of permits, support from the city, and money to host this event. I’m in my 60s now, so it is so nice to see folks in their 30s and 40s on the steering committee with the same passion we had to make it work; they know what it takes to keep this thing going. Our community is really good at being last minute, but this year we were sold out of vendor booths two months out! It is great to know that the next generation — the teenagers that participate, are able to be themselves — will replace us someday,” Mary said.

Mike Shouse, former director, treasurer, and founder of KPF, says that even though he is in “pre- retirement” from the event, he is looking forward to the inclusivity and community support that the energy of an in-person parade creates. He has seen the festival grow from 1,200 participants in 2001 to over 10,000 currently. “After the Pulse nightclub massacre, the support from the community increased. Last year we had a virtual parade. We created a float and took it around to the bars. At one point we took the float to Jefferson Square Park to join in the protests [for justice for Breonna Taylor]. There was this heartwarming moment between both groups where people jumped off the float and hugged the protesters. The synergy between the two groups was quite amazing,” Mike says.

Some of the trends of change he sees in the festival are the inclusion from allies throughout the community and the emphasis on the intersection of marginalized groups showing support for one another. Mike is thrilled about the activism of the younger crowd on the festival’s board. “I never wanted to be the old fart that says ‘that’s the way we’ve always done it.’ It’s nice to have some young people come in and take the reins and advance the festival further.” 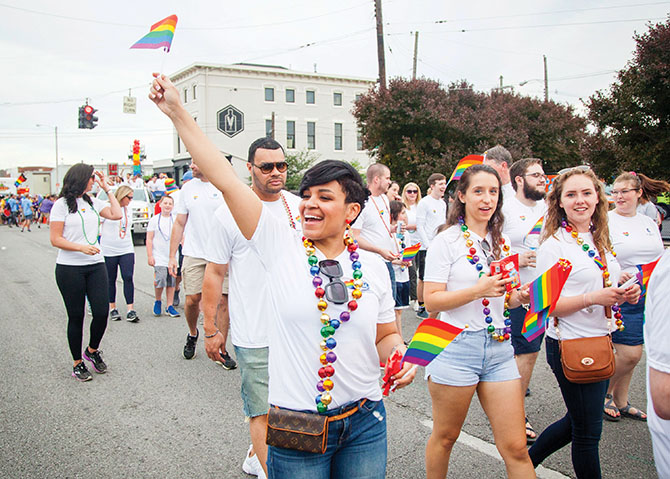 Years ago, the Louisville Pride Picnic, one of the beginning entities of the current Pride Festival, didn’t even invite the media. Now, support from the festival comes from swaths of various sectors throughout the community, including religious groups, local government, and other social-justice organizations. “Louisville,” Mike says, “is an incredibly supportive community” for the LGBTQ+ community.

Kroger, one of the festival’s largest sponsors, has also seen support for the event over the years. Since 2015, with their giant grocery cart filled with Kroger team members decked in rainbow-wear, they have danced and waved and sauntered down the parade’s path in solidarity and celebration. Over 100 team members participated during the last parade, and they hope to have the same enthusiastic support this year.

All the parade and event veterans are waiting with baited breath as the number of Kentucky’s COVID-19 cases rise week by week. “I hope COVID-19 doesn’t restrict us,” Mike says. The celebration of community support is incredibly important in the wake of racial unrest and the pandemic.

“This event allows the LGBTQ+ space to celebrate and be themselves. This event provides people a place to feel safe to express themselves the way they want that isn’t possible in the normal work or school day,” Mary says. “Our mission is to engage everybody. Diversity and inclusion is a priority.
It always has been.”

P.S. Check out this weekend’s lineup of activities for the Kentuckiana Pride Parade & Festival!