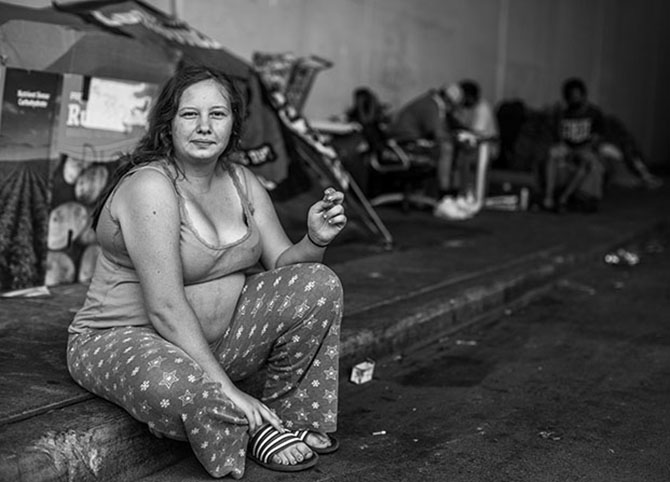 Abigail, who is pregnant, has lived in a maternity home and at Wayside Christian Mission. She now lives in a tent within a homeless camp.

Abigail Sallee is seated on a curb.

On the sidewalk behind her a man repairs a bicycle. In the street in front of her cars drive past. Across the intersection is a patch of grass. Sallee points to two tents pitched there.

“I’m at the blue tent,” she says. “But it’s really hot over there right now.”

Which is why Abigail is sitting on the curb under an interstate overpass on Jefferson and Jackson streets surrounded by more than a dozen additional tents as well as a desk and chairs. She wears gray lounge pants and a purple tank top. Snack wrappers litter the street. The air smells of urine. Someone shouts out the open window of a passing vehicle, “You’re poor!” 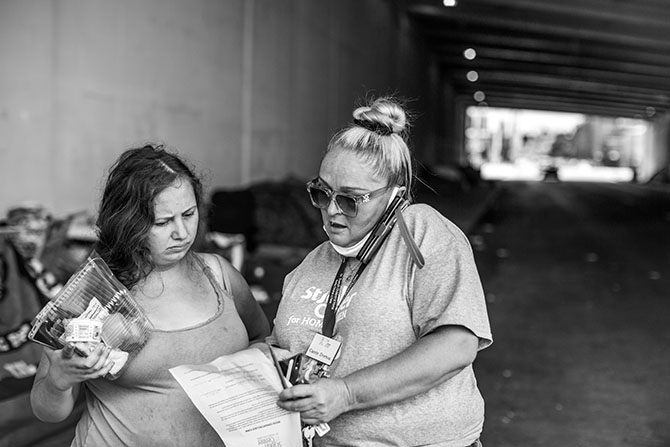 Abigail is 19 and pregnant. Since moving to the camp in early 2021, she has gone through six or seven tents. She points to the various spots under the overpass where she has lived. It is not good to stay in one spot too long because then everybody knows where you are, she explains. Her current tent belongs to Alley Cat, an older man standing nearby who looks out for her, she says. As she talks, Carrie Dorton peppers her with questions.

“Have you had any prenatal care so far at all?”

“Where did you get your pregnancy test done?”

“When was the last day of your last period?”

The answer to the first question is no. The answer to the third is mid-January. It is early July. Carrie relays the information back to a doctor’s office via her cell phone. As a peer outreach worker with St. John Center for Homeless Men, Carrie checks in on Abigail regularly. At one point she found her a spot in a “really, really nice” maternity home. She dropped her off on a Friday. By Monday Abigail was back on the street. She stayed in a shelter at Wayside Christian Mission longer – several months – but left because there were bugs and other critters, she says. There was also a face mask mandate.

“Masks make me feel like I’m suffocating,” Sallee says. “So, I can’t wear them.” 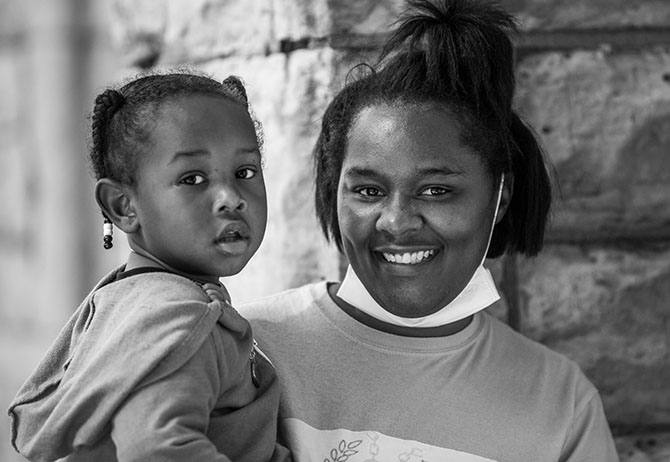 Tanyal Jefferson had to seek shelter for she and her 5-year-old son Demon’Tay after her mom’s death in 2020.

As Louisville begins to reopen following COVID-19 restrictions Carrie and the director of the city’s day shelter for women, Uniting Partners for Women and Children (UP), both report seeing more women sleeping out. According to the annual Point-in-Time Homeless Count for Metro Louisville, which counts how many people are homeless on a given night each January, the number of unsheltered men and women grew from 141 in  2021 to 257 in 2021. This mirrors a national trend with homelessness among unsheltered populations increasing between 2019 and 2020, according to the U.S. Department of Housing and Urban Development’s (HUD) 2020 Annual Homeless Assessment Report Part 1.

In Louisville, UP director Amy Meredith believes restricted services and fear of contracting COVID-19 kept people away from shelters during the pandemic. The stress of sleeping out in turn caused additional trauma, says UP Shelter Manager Shannon McCure. The result is that the women UP serves now are more fragile.

“So, we’re seeing a lot of severe mental health, a lot of addiction in women that are just going through a lot of trauma,” Shannon says. Women experiencing homelessness have always been vulnerable. That is why Meredith co-founded UP as a women’s day shelter in 2018. Citing a 2005 report funded by the U.S. Department of Justice, Meredith explains that approximately one woman out of every four experiencing homelessness is homeless mainly because of violence. That violence continues on the streets, Shannon says. Robbery, sexual violence — “they’re just vulnerable.” Amy has heard of women sleeping with box cutters in their bras.

Alicia Padilla sleeps with a pit bull and a taser in the Toyota Avalon she shares with her husband and stepdaughter. When the weather is nice, they sleep in a tent. Alicia, who is 34, says she isn’t worried about safety. 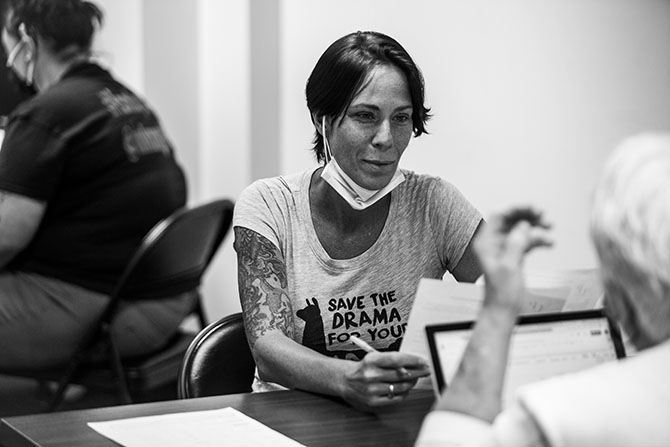 Keva Parker receives guidance from an advisor at UP for Women and Children.

Alicia brought her stepdaughter, Mia, 12, to UP’s Friday morning drop-in services to pick up hygiene products. The family has been experiencing homelessness for several weeks — since June — when they were evicted from the apartment where they were living. She is one of four women, living in a car, that the shelter provided that day with a snack pack and other items from socks to bras to first aid kits. They also served seven women living on the street and another 30 living with friends, in shelters, at home or in unknown circumstances. Since the shelter opened, they have offered 1,227 women and children a safe place during the day — a place where they can shower and wash their clothes, find counseling and housing assistance, apply for identification cards and collect their mail, which the non-profit sorts and stores alphabetically. During the pandemic UP had to scale back, but in summer 2021 they began offering most of their original services.

Christine Mars came the same day as Alicia to pick up two letters, including an update on the Kentucky identification card she had applied for with UP’s help. She lost her original identification card in a robbery, she says. She tells her story by the scars life has left on her body. There was a bike crash that damaged her left shoulder. Two violent robberies that caused loss of blood. Mental illness and trauma that led to drug use – meth, coke, crack, pills. Pregnancies and separation, just as she says she was once separated from her own mother. Sober five months, Christine is living in a shelter hoping to get a job and be reunited with her children. She is 30 and looks both younger and older with freckles on her face and rose and skull tattoos on her arm. 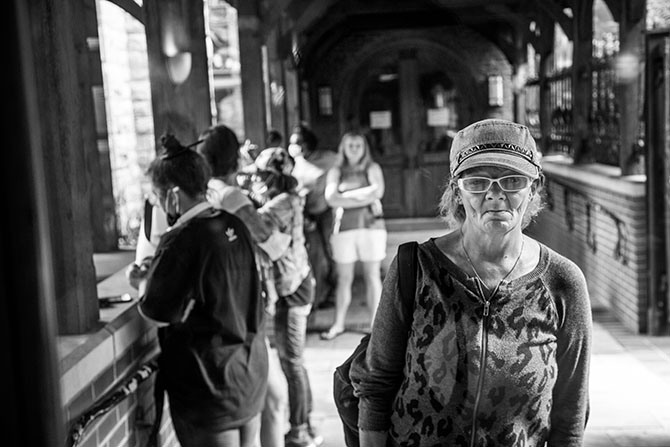 Melissa Cowan waits in line to get into UP for Women and Children after spending the previous night at the Salvation Army.

Tanyal Jefferson is five years younger and is accompanied by her two-year-old son, Demon’Tay. In the beginning of 2020 Tanyal lost her mother and the free childcare her mother provided her while Tanyal worked in housekeeping. After her mother’s death, Tanyal had trouble finding affordable and available (due to COVID-19) childcare. She started missing work. She lost her job and then her home. Along the way she also lost her identification papers, which is why she came to UP. At first, she still had a car and at night she would park in front of her relatives’ homes. They weren’t located in the best neighborhoods, so she would stay up to keep watch while Demon’Tay slept.

“I felt weak – and scared,” she says. When she was no longer able to make car payments she moved to a shelter.

Miracle Johnson stayed at the same shelter with her daughter Za’Kiya Simmons, 10. Although they were separated from the men, their presence made Miracle nervous. When Za’Kiya got sick Miracle feared it was COVID-19. It wasn’t. Za’Kiya had a very bad respiratory infection. Miracle has since been able to rent an apartment and came to UP for help obtaining identification papers. Others who need even more assistance never make it to UP in the Open Diocesan house next to Christ Church Cathedral. That is where Carrie comes in. 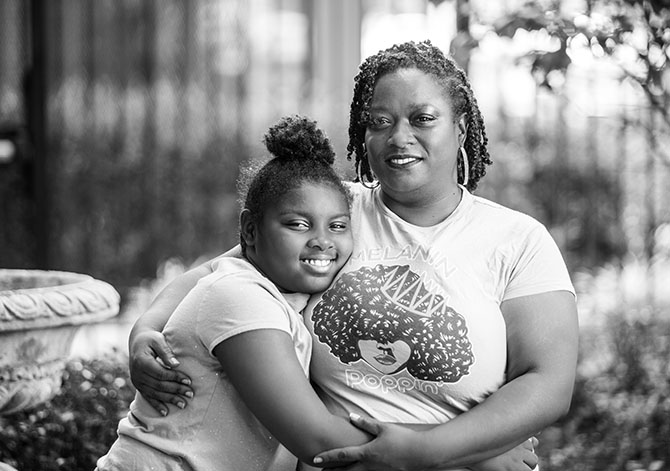 After receiving help from UP, Miracle Johnson and her daughter Za‘Kiya are now living in an apartment.

Setting the Tone for a Brighter Future

Although St. John Center serves men, Carrie conducts outreach for women as well as men. Five days a week she drives the streets of Louisville checking in at various camps delivering clothing, food and companionship. She schedules appointments and provides transportation. The same Friday UP was helping Miracle and the others,  Carrie was delivering April Morris a new tent – the old one had maggots. Her underwear and clothes were stolen. April is 46 and has been living on the streets for years, most recently under a cluster of trees near the train tracks off Preston Highway.

When Carrie finds her, she is barefoot and acting like she is high on meth. Her story is disjointed but features abuse, boyfriends, drugs, incarceration, illness and family estrangement. April says she has been attacked four times and carries a hatchet for protection.

Back under the overpass, Abigail, the pregnant teenager, says a man tried to break into her tent once. She has a latch that kept him out, but if he had made it in, she also has a club-like weapon. Before she lived on the streets, she had a home in Northern Kentucky. She says she was placed in the foster care system and later a mental health facility. From there she was released to a shelter in Louisville, she says.

By the time her daughter is born in October, she hopes to be living inside. The program Carrie has found for her will help her find both a home and a job. Abigail already has a name picked out for her baby: Mackenzie Rose. She has also chosen a career for herself. She wants to be a nurse. The future she envisions seems a world away from the street curb where she sits. But then 11 years ago Carrie was also living on the streets. Addicted to crack, Carrie didn’t think she would ever make it out. She did, and she has been sober for more than a decade.

Still, says Carrie, “I’m one check away from being homeless myself.”

P.S. For more information on supporting the homeless in our city, contact the St. John Center for Homeless Men, Wayside Christian Mission, and Uniting Partners for Women and Children.