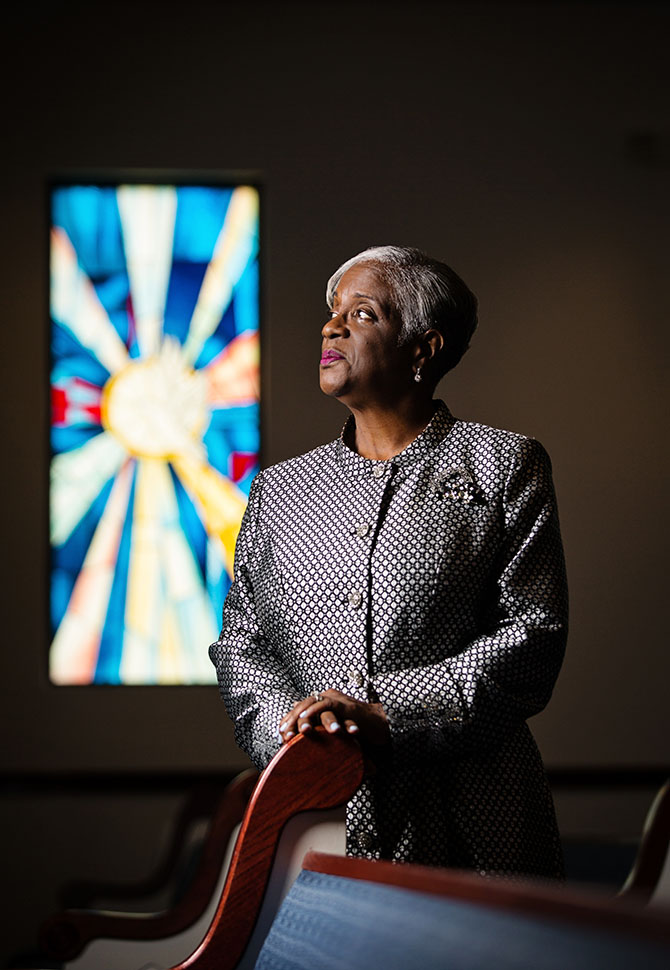 “There are still those who believe that God does not call women to pastor. It does not deter me from the call, though. I think I’ve changed some people’s minds.” — Alyce French Johnson, pastor at Oak Grove Baptist Church.

Meet five women who are transforming lives from the pulpit.

It seems obvious that women would make good pastors and rabbis given their historic role as nurturers. Who better to minister to the spiritual needs of a community? Of course, being a part of the clergy is more than just nurturing others. It is about planning, organizing, listening, strategizing, administering, and bringing God’s word to those who need it. The social unrest following the deaths of Breonna Taylor and George Floyd, political animosity in government, and the impact of COVID-19 have made ministering to others’ spiritual needs an especially challenging task, but Louisville has a wealth of female clergy who are working to make a difference in the communities they serve. 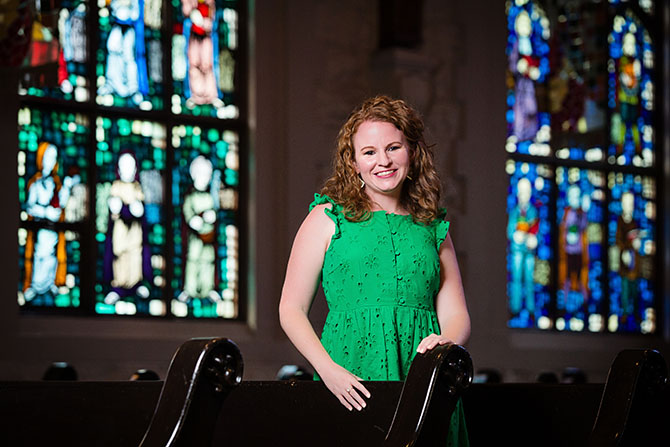 “I preached to a camera and a laptop for my first 10 months to an empty sanctuary.” — Mary Alice Birdwhistell, pastor of Highland Baptist Church.

Coming to the ministry

Alyce French Johnson has been pastor at Oak Grove Baptist Church for four years, but she has a long history with the church. “My grandfather and grandmother founded Oak Grove 75 years ago. My uncle (Thomas Henry French), who I worked under, was the second pastor, and I’m the third,” she says. She spent her secular professional life at TARC where she worked in various roles for nearly 40 years. “I’ve done a lot of different things with people. Being the pastor is not a whole lot different,” she says.

Dr. Kathy Ogletree Goodwin has a dual appointment at Crescent Hill United Methodist Church and Buechel United Methodist Church, preaching at both churches each weekend and fulfilling pastoral duties in both places. “It’s a lot, but we’re making it with God’s help,” she says. She originally planned to become an attorney, but she says God had a different path for her, including working in social services, where she witnessed people in need — children who were abused and parents who needed financial assistance to create whole lives. She has now been a pastor for over 25 years.

The Episcopal Church didn’t ordain women until the late 1970s, so becoming clergy wasn’t even a possibility for Candyce Loescher, rector at St. Mark’s Episcopal Church, when she was growing up. “I did everything in the church I was allowed to do at the time, but it was a door that was closed that never looked like it could ever be opened. I just went on with my life,” she says. She trained as a sculptor, etched names on the Vietnam Veteran’s Memorial in Washington, D.C., and even sold airplane parts.

Mary Alice Birdwhistell, pastor of Highland Baptist Church, didn’t see women pastors either. She found herself being drawn to the work of a pastor but was told women are too emotional for the role. That didn’t stop her from exploring her curiosity and eventually going to seminary at Baylor University in Waco, Texas. She began working in children’s ministry at Calvary Baptist Church, which was unique. “Back in the 1990s, they had called the first female pastor of a Baptist church in the state of Texas,” she says. Mary Alice went from being children’s minister to associate pastor to pastor during her 11 years there.

Sharon Hordes, cantor at Keneseth Israel, trained to be an opera singer at Indiana University, but says, “As I got closer to graduating, I looked back on my four years at college and realized I’d really found the volunteering work that I had done for Hillel (a Jewish college organization) to be very rewarding.” She had thought about going into social work and realized that becoming a cantor would blend her love of singing and music with her love of being with people during the highs and lows of their lives (births and deaths). She is coming up on her 20th year in the clergy. 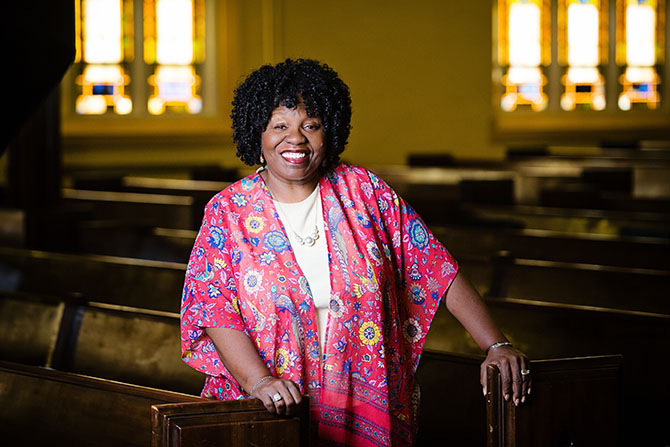 Candyce takes a philosophical approach to challenges. “I think the whole church is in a time of change. Some people way smarter than I have all said every 500 years Christianity goes through a major overhaul. I think we’re in a time like that right now. The hard part is it never happens in a hurry,” she says. Of course, challenges aren’t always negative. Difficulties often force people and institutions to change, see opportunities, and grow in ways they might not have willingly done.

Every church has been impacted by COVID-19, but they’ve been impacted differently. For some congregations, they have experienced higher rates of illness and death. “There is a disproportionately large percentage of essential workers [in my community] who are placed at higher risk of contracting or suffering impact from COVID-19,” Alyce says. There are also the difficulties of acquiring health care, reliable transportation, and high-speed Internet for many of her congregants. She says the basic thing she has done during her tenure, but especially over the last 18 months, is to encourage them not to give up hope. However, she realizes that sometimes their physical needs of food and shelter have to be met before she can minister to their spiritual needs.

Mary Alice was called to Highland right before the pandemic began, so adapting to a new church environment while also trying to adapt to restrictions and precautions has been a challenge. “I preached to a camera and a laptop for my first 10 months to an empty sanctuary,” she says. What is funny is that when she was interviewing with the search committee prior to being called, she asked what the biggest challenge was facing the community and they said “parking.” Highland Baptist Church is landlocked in a busy part of town and is a growing church. “During my first year as pastor, there is not a single Sunday when parking has been an issue,” she says.

Even though Kathy’s Methodist churches are in different parts of Louisville with unique communities, she says, “Because they both are made up of people, their challenges are the same. They’re challenged with their spirituality, with equity, justice, peace and love.” Her role is to help them remember the Bible when it is far from their thoughts but also remind them that God acts through them. “We have to be the voice, hands, and feet of God,” she says.

For Sharon, a challenge she sees is helping people understand the value of membership in a religious community. “People aren’t joining synagogues as they used to in the past, and that’s troublesome,” she says. She often thinks about the life cycle events people experience and how much support and meaning comes from connection to a religious community during those times. Sometimes people don’t like attending service or praying, “and they think that’s the only reason to be part of a religious community. There’s so many ways the community gives back to you,” she says. 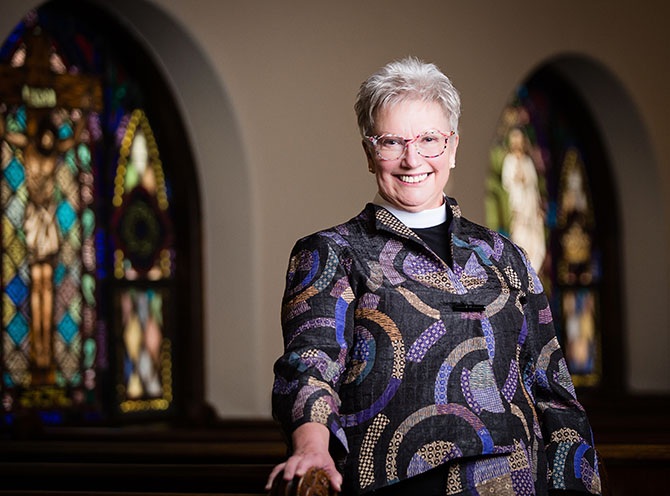 “I did everything in the church I was allowed to do at the time, but it was a door that was closed that never looked like it could ever be opened.” — Candyce Loescher, rector at St. Mark’s Episcopal Church.

The uniqueness of female clergy

Despite these challenges, female clergy offer some uniquely wonderful gifts to their congregations. Kathy says the sensitivity women bring to their roles as clergy is a positive for them as well as their community. “God has shaped us differently,” she says. “We know pain in a different way than men do.” She says female clergy are always being challenged, which is both positive and negative. While being challenged is tiring, “it helps us to be able to respond in a holistic way in what we know and have experienced in Christ,” she says. She uses these challenges to teach the Bible in a way people may not hear under a male preacher. Women have been in leadership roles in the church since biblical times and Kathy adds, “We are never going away; we’re getting stronger every day.”

“There are still those who believe that God does not call women to pastor,” Alyce says. “It does not deter me from the call, though. I think I’ve changed some people’s minds.” Being a pastor is, of course, about spiritual education and leadership, but it also involves a slew of other skills at which women excel including administration, organization, and communication.

The communication piece is something women, as a general rule, tend to do especially well. One-to-one communication is part of the ministering role, but preaching is as well. “I really love preaching,” Mary Alice says. “Each week I get to share what I hope is this life-giving word with our congregation.” For Sharon, tutoring one-on-one or teaching small classes gives her tremendous joy and fulfillment. “I also love singing and being at a service, watching people respond to the emotional nature of the service,” she says. “It’s a powerful role to be playing.” 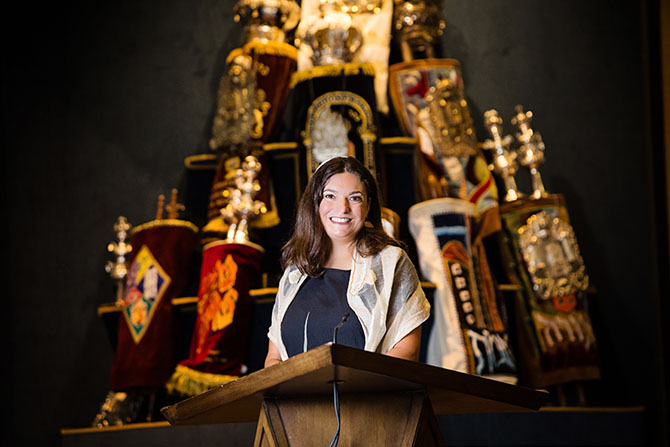 “I also love singing and being at a service, watching people respond to the emotional nature of the service. It’s a powerful role to be playing.” — Sharon Hordes, cantor at Keneseth Israel.

While being clergy is a calling, it is also a job, which means there are headaches and hassles that come with it. Candyce says St. Mark’s is a 125-year-old building, so something is always breaking. “Nobody tells you in seminary that you’re going to have to have some concept of plumbing, heating, roofing, and how to get a parking lot repaved,” she says. There are meetings that Sharon doesn’t always love and the struggle Alyce experiences of trying to help her own family while ministering to a congregation. But for all of these women of the cloth, being part of people’s lives, offering them help and hope, is the greatest gift they could have been given.