Owning the Game — And Her Life 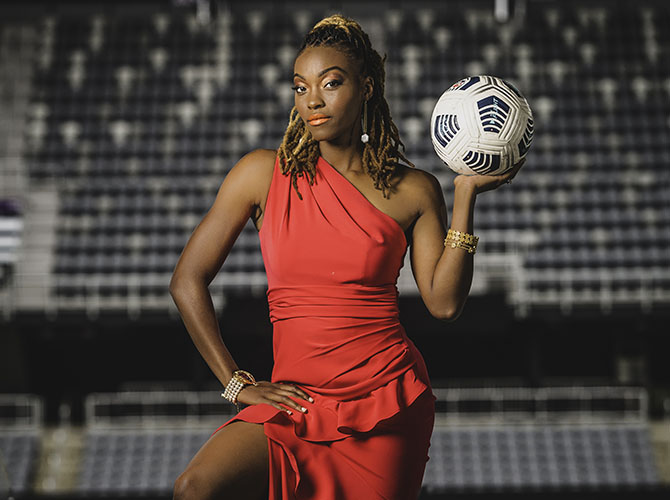 Racing Louisville FC soccer forward Cheyna Matthews and the team are preparing to host the inaugural Women’s Cup at Lynn Family Stadium on August 18 and 21. Cheyna is wearing: Theia dress, $895, and gold earrings, $180, at Glasscock Too; Gypsy pearl and gold bracelet, $265, and Julie Vos gold bracelets, $95 to $110, at Rodeo Drive. Hair and Makeup: Jill Higginbotham and Mikhail Schulz for J Michael’s Spa and Salon.

Cheyna Matthews is playing to win, on and off the field.

Cheyna Matthews, forward for Racing Louisville FC, and her four siblings were all introduced to soccer when they were young, but she says she was the one for whom the game really stuck. “I fell in love with soccer and decided to play competitively,” she says. She earned a scholarship to Vanderbilt in Nashville, Tennessee, where she played for two seasons and then transferred to Florida State University in Tallahassee. Following her commencement, “I entered the National Women’s Soccer League (NWSL) college draft in January 2016 and was drafted to Washington Spirit in D.C., seventh overall,” she says. 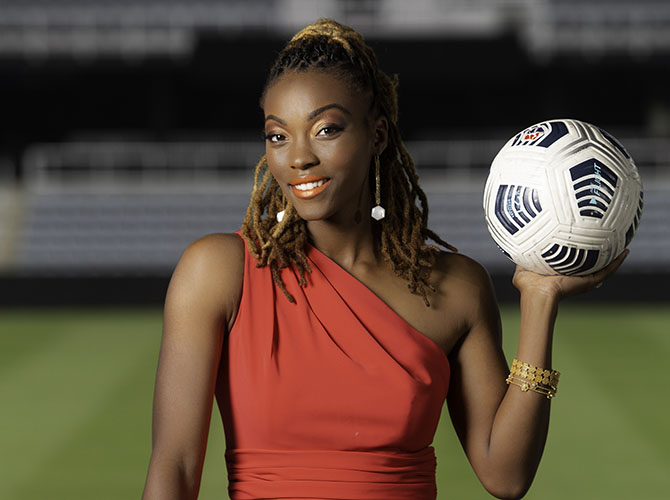 Like many women, Cheyna’s professional life began to get a little more complicated after she married her husband, Jordan, who happens to be an NFL free agent, and became a mom to Josiah in 2018. “I was kind of uncertain if I would continue to play soccer. We had a toddler, [and] I had played in a World Cup for Jamaica, which was my dream,” she says. At one point, Jordan was playing in California with the San Francisco 49ers while she and Josiah were in Washington D.C. Life had gotten so busy, Cheyna didn’t know if she could find a way to do what she loved professionally while also being the wife and mother she wanted to be.

“I started hearing whispers of a team that would be close to where we call home, which is Nashville,” she says. “If I could end up there, it would probably extend my playing career.” That team was Racing Louisville FC. Cheyna knew she wasn’t going to return to Washington Spirit and became a discovery player (which is similar to a free agent). “Louisville was able to pick up my rights as a player,” she says. Recently, Cheyna was also named to the roster of the Jamaican Women’s National Team (her mother is from Jamaica).

When Cheyna played in the World Cup in 2019, Josiah was nine months old. Her son, Lionel, is now five months old as she prepares to play in this summer’s inaugural Women’s Cup, a four-game tournament that takes place on August 18 and 21. She is frequently asked how she does it, and the answer is, “To do it, you just have to start,” she says. “I’ve done it before; I can do it again. If you want to continue to follow your dreams, and you have the support and will, then there’s ways to make it happen,” she says. 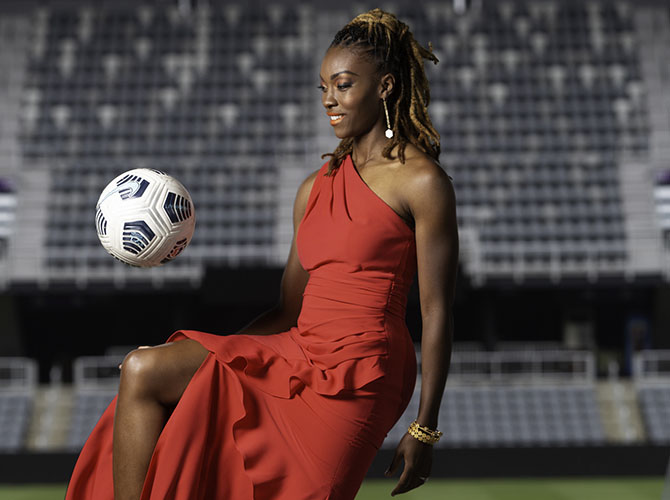 She credits Racing Louisville for being receptive to her needs as both a player and a mom. “They make it as easy as they can from their standpoint. If my sitter can’t show up, I can bring my five-month-old to the facility and know that somebody is going to be able to help with him,” she says.

That club support is critical to helping Cheyna and her teammates devote their energy and focus to playing and winning. Team staff films practices, and players really take the time to analyze what they are doing on both an individual and team level. “Our team has even invested in analytics. Not only are we able to break down our own play, but the opposition’s play. Those things give you an edge,” she says. As a new team, players are focused on creating their team identity and finding their shared core values.

Of course, The Women’s Cup in August at Lynn Family Stadium is a huge boon to soccer fans, but Cheyna says the buzz this tournament creates has ripple effects through the community. “It’s showing how connected and universal the sport is. The fact that we get to host world class teams in Louisville shows the kind of facilities they invested in and how state-of-the-art they are,” she says. Those of us who have known and loved Louisville aren’t surprised that Louisville is finally getting its moment as a global player.

P.S. Read about how other members of the Racing Louisville FC team are gearing up for the Women’s Cup.