Hatmaker, Hatmaker, Make Me a Hat! 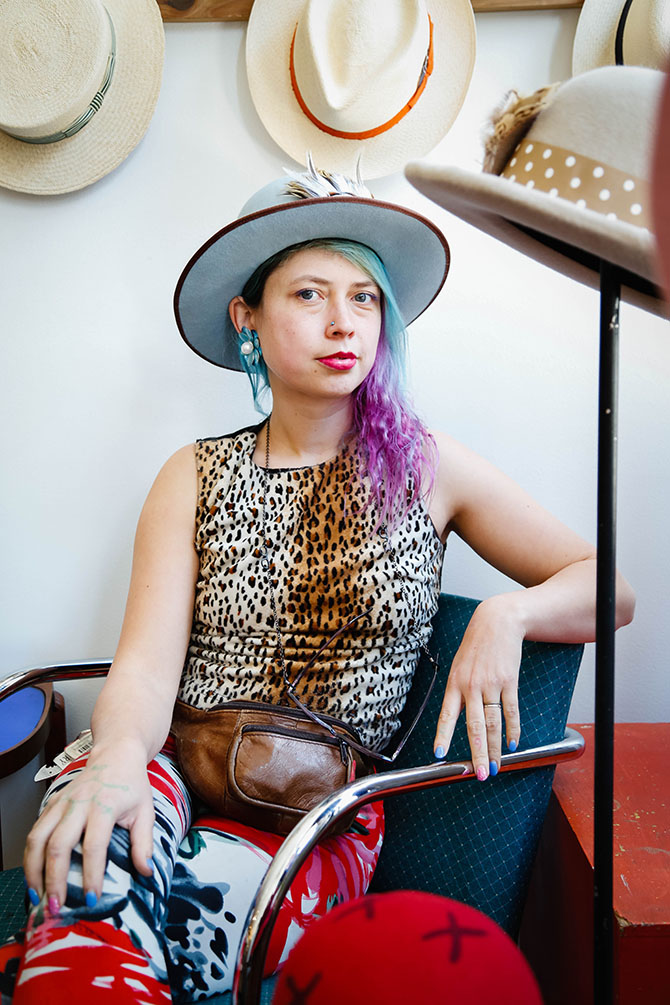 “I like to surprise and delight, and go beyond the call of duty when I can. I’ll bend over backward for my clients,” says Milliner Olivia Rose Griffin of The Mysterious Rack.

Usually it’s pretty crazy. People will fly in for the Kentucky Derby that Tuesday or Wednesday before and come in needing a hat,” says local milliner Olivia Rose Griffin of Griffin Hatters, whose shop, The Mysterious Rack, is located on South 4th Street within sight of The Louisville Palace.

“Women from out of town send photos of their dress, and I’ll send them photos of hat shapes and options,” explains the San Francisco native, who moved to Louisville in 2014. “Local women bring their dresses in. Even the week of Derby, first timers who’ve flown into Louisville, having brought something small and demure, will decide to upgrade after seeing other women parading around Churchill Downs’ track in much larger hats. And that’s how I end up making a lot of Kentucky Derby hats the week of Derby…up until the morning of the race itself,” she says.

As to how Griffin became a milliner of men and women’s hats, she explains, “I already had an undergrad degree in fashion design and costume design and a background in sewing. Ended up taking over a 100-year-old San Francisco hat shop in 2009, which is what led me down the path to hats. Started my shop here after I moved to Kentucky. 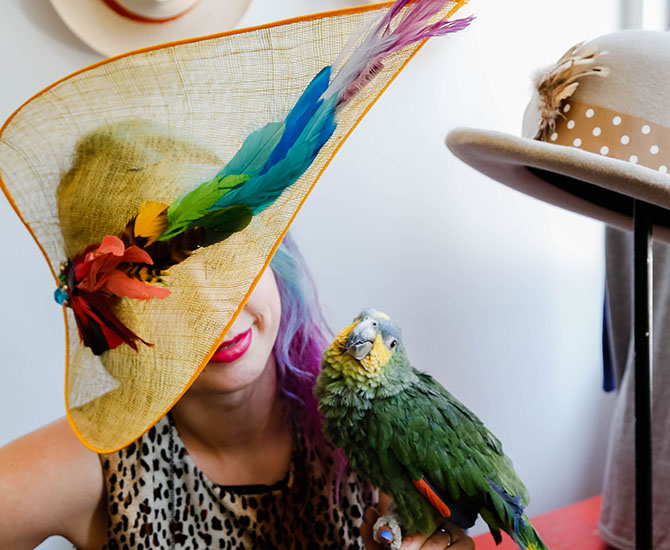 “What I tend to make are very large and elaborate hatinators, which is kind of different than fascinators,” she continues. “And so the shape of the hat doesn’t matter so much, it’s more the client’s hair color and skin tone (that) I’m looking at.

“I think wide brim and giant hats can be kind of cumbersome,” she mentions. “Especially for people who aren’t used to dressing up that much, it can be the hat wearing the person, rather than the person wearing the hat.”

Griffin also makes all her hat shapes herself, unlike other sellers. She creates new silhouettes and profiles in a small, medium, and large version. “Once the customer chooses what size she wants, I go from there. Really, it’s just the color
that the client has control over when it comes to the creative process,” she explains.

“We use a lot of veiling in a lot of our styles every year, because women love it…it’s a very romantic (look).” Griffin also collects vintage brooches and buckles to implement into her designs. “I like making things that are one of a kind.”

“And yes, I usually wear hats…one, because it’s advertising for my company, and two, because it’s fun. It’s a talking point. When you’re out in public wearing a hat, more people will talk to you …strangers will come up to you, asking about your hat, and that becomes an icebreaker.”

P.S. Take the Today’s Woman “Did You Know?” quiz and be entered for a great prize!