Gifts to Our Community: My Stroke Box 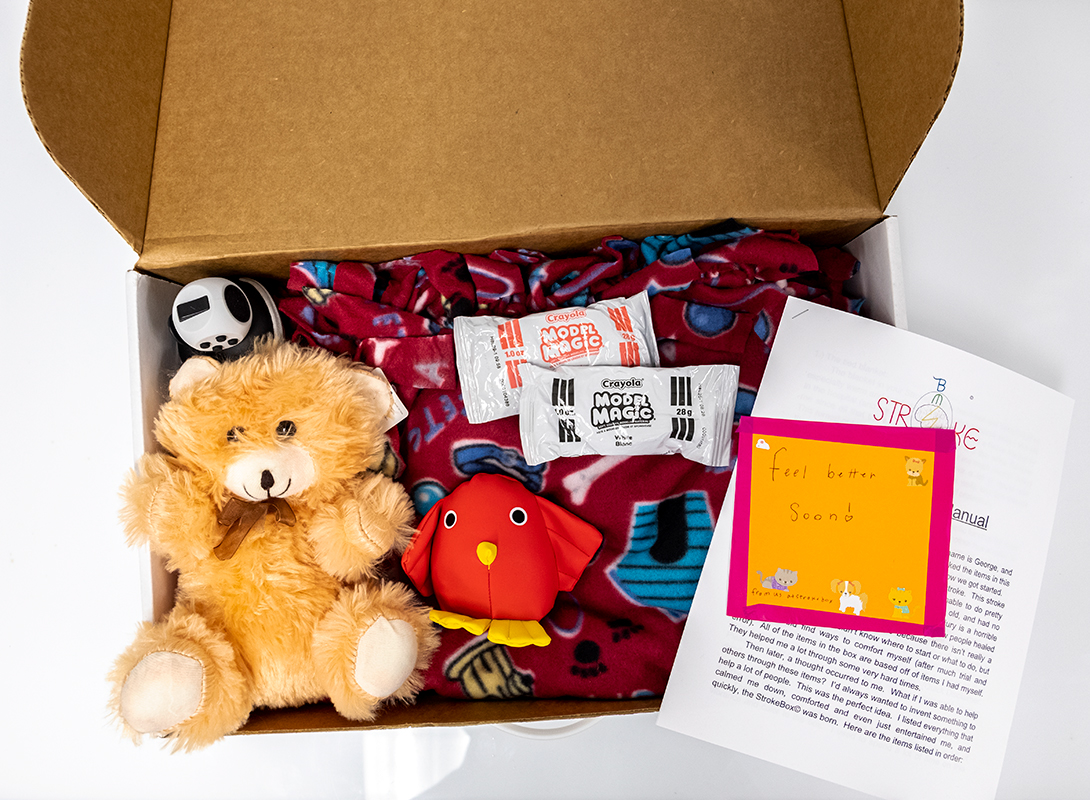 On December 1, 2016, George Dwyer suffered a stroke at the age of 14 after experiencing a fall while playing ball. After an MRI, doctors discovered that George had an aneurysm, and the clotting of blood around the aneurysm had caused the stroke. “Fortunately, the aneurysm itself did not break, but [George] lost all the movement on the left side of his body,” says George’s mother Alison Dwyer. Doctors told George’s  parents that if the aneurysm wasn’t stented off, he would not survive more than a couple of months.

George was in intensive care for a time, but as he improved, he was eventually transferred to Frazier Rehab Institute for several weeks. While at Frazier, he began to get a little movement back in his hand, but he was in a wheelchair most of the time. He had to use a gait belt when he tried to walk. It wasn’t until a stent was placed in January 2017 that blood flow improved to the point that his brain was able to heal.

As George was recovering, he told his mom: “What I really want to do is go back down to Frazier, sit with the kids, and play games with them. I’d like to go and encourage people that they can recover, too.” However, a job change resulted in the family’s relocation to Madisonville, Kentucky, a three-hour drive from Louisville. George was disappointed that he couldn’t help patients at Frazier in person, but he came up with the idea for MyStrokeBox, which is filled with items that helped him when he was in rehab.

Each stroke box contains the same items, although colors and patterns may differ: a hand-tied fleece blanket, a teddy bear, a fidget cube, modeling clay, a bean bag animal, a card, and a MyStrokeBox manual, which George created, that explains what happened to him and why he includes the items. Along with his family, George is working to establish MyStrokeBox as a nonprofit, so that through donations, he and his family can offer additional comfort to not only Frazier patients but patients nationwide.

P.S. This woman is changing the lives of families in need.