Find Peace, Beauty, and History in the Orkney Islands 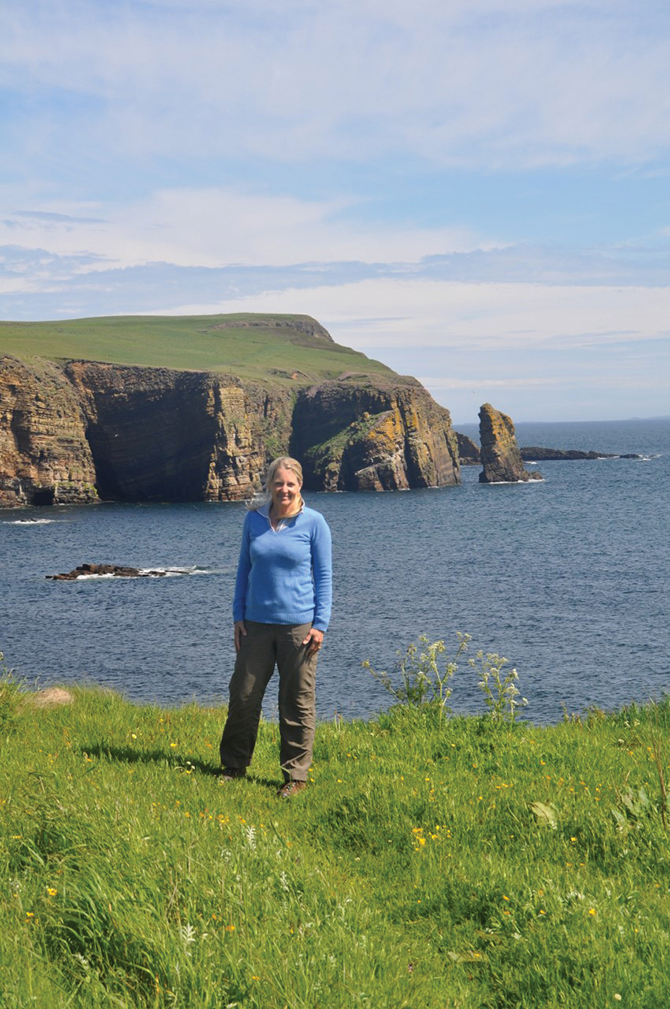 It was a 2014 National Geographic cover story that planted the seed of travelling to Scotland’s Orkney Islands, but perhaps the longing was something more primitive, tied inexplicably to Wendy Sirchio’s ancestral roots.

What else would make a solo trip to the remote northeastern Scottish isles (notably cold and rainy and filled with old stuff) appealing? Only a Viking’s bloodline could explain her tenacity in traveling alone via an international flight, three trains, two coaches, a ferry, and a rental car to reach a patch of land so far north it practically falls off the map — just to reach some very old stones that jut from the green ground like mythical totems. But after a strike caused the local airport to shut down, Wendy made the trek, with relish (and a side of haggis and spot of Scottish whiskey).

The National Geographic feature that Wendy couldn’t shake detailed the Neolithic history of Scotland’s northmost landmass, presenting photographs of the prolific and profoundly preserved 5,000-year-old burial and ritual sites. Wendy had once believed that Stonehenge was the only place to see such relics until her eyes and heart were opened to the Orkneys. “I said I must go there,” Wendy says while pulling out postcards of each UNESCO World Heritage site from a file folder dedicated to her recent trip. In enthusiastic detail, she explains the features of each site complete with historical, geographical, and engineering facts.

“It is a special place to visit. There are not many other people there, and those that do visit are more interested in the history or the landscape — birdwatching or hiking — rather than the people. Everyone seemed to have a great appreciation for history and place, not just to tick a box on a bucket list. It was the perfect place to travel alone.”

The Orkney Islands consist of about 25 miles of low-lying landscape peppered with five Bronze-era sites built by Norsemen. Surrounding the bowl-shaped setting are the Lochs of Harray and Stenness, an isthmus that houses nesting gulls and puffins, and an amphitheater of hills. The lush farmland attracted Vikings and northern explorers for thousands of years, and the relics they left behind attract visitors like Wendy who travel the world to see them firsthand. Among them is Maeshowe, the most well-preserved chambered tomb in northwest Europe. The circular mound was constructed well before powered tools and machinery could move giant boulders or excavate the earth. Inside lies a sophisticated labyrinth of stones etched with Viking graffiti and designed to celebrate the winter solstice. 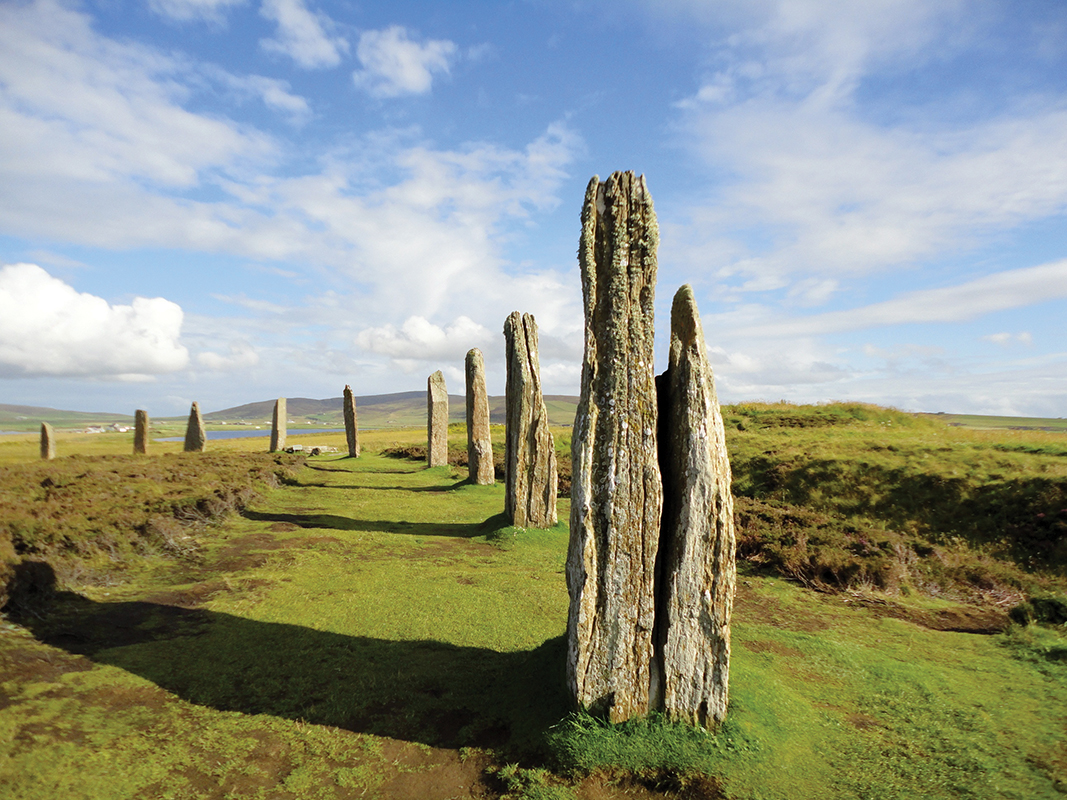 Another site, the Stones of Stenness, houses the oldest known stone henge (vertical stone pillars that jut from the landscape in oftentimes circular patterns). The Ness of Brodgar is the region’s most complex dwelling site for Neolithic religious or political leaders. The walled community spans, according to Wendy, four ball fields. Skara Brae, on the other hand, gives visitors an insight into the daily lives of commoners during this time period. Buried for centuries beneath the sand, these preserved dwellings shed light on interesting household items: stone fish tanks, beds, and dressers.

The area is also rich in modern history as the isles became a key northern port during World War II and housed Italian POWs. Much of the history Wendy gleaned from her hired tour guide, an expense well worth the cost, she says, if you plan to travel to Orkney. “I did not want to be on a tour bus and wanted to do my own driving, so having the tour guide direct me for half a day was wonderful. She was a local and could give me insight into daily farming life as well as the history of the area.” 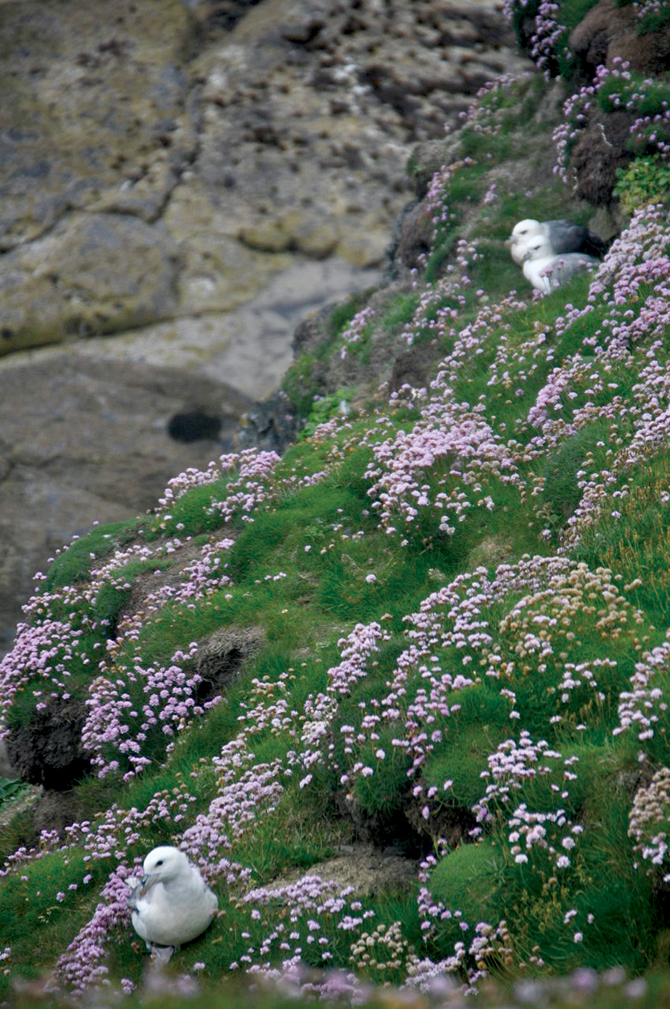 Wendy also advises planning ahead if interested in an excursion to the Orkney Islands. She had one month to plan her trip and was barely able to find a rental car. In addition, Wendy recommends purchasing the region’s cultural pass that allows entrance into all the UNESCO sites, and trying haggis, but steer clear of the vegetarian version (unless you are keen on oatmeal loaf). Besides the historical sites, The Orkneys are also home to several Scottish whiskey distilleries and offer an abundance of fresh seafood.

The Orkney Islands are not for everyone, but if you are looking for a quiet adventure ripe with history, beauty, and simplicity, this Scottish secret may be for you. “I felt comfortable traveling, even driving on the opposite side of the road, alone. There are not many places in the world where I could comfortably pick up hitchhikers.” In Orkney, peace, safety, and solace are preserved just like the ancient settlements that reside there. A secret northern oasis free from the disturbances of life well below its longitude.

EXTRA TIPS TO KEEP IN MIND:

How to get there: