Finding Zen in the Forest: Why Bathing in the Outdoors Can Be Beneficial to Your Health 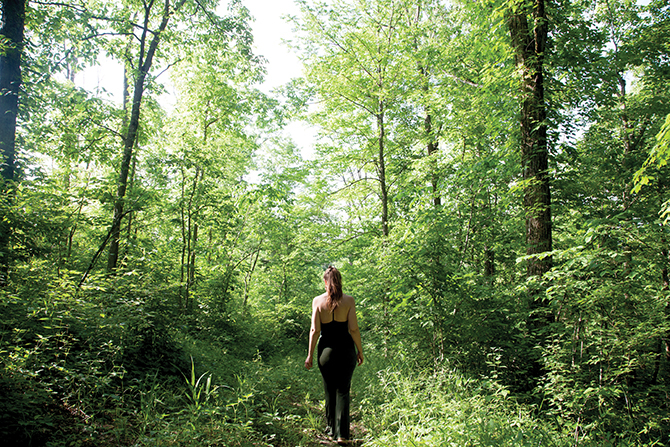 Deep in the woodlands of Louisville’s many green spaces, there is a group who considers immersing themselves in nature a soothing pastime.

The Shinrin-Yoku Society of Kentuckiana, led by Ecotherapist and President Jennifer Owens, LCSW, LMT, CPT, participates in forest bathing, which members say is beneficial to their health.

Jennifer has been backpacking, trail running, and hiking her entire life and now has more than 15 years of experience in holistic health and nine years in mental health. She’s the co-founder of Bridge Counseling and Wellness, an integrative mental health and wellness center, and the founder of The Academy of Integrative Mental Health.

But, it wasn’t until she made a goal to pick up trash for a whole year on a wooded path that she had a “shift eternally” in her relationship to nature. “I thought, I’m pretty sure this is therapeutic,” she says. “This is a game-changer.” Time Magazine projected by 2050, 66 percent of the world’s population will live in cities, so a little time in nature may be good for us.

Now, Jennifer specializes in an outdoor-mindfulness based, somatic approach to individual therapy. She wants to reconnect humans with nature for  “the increased well-being of ourselves and our planet,” Jennifer says in a press release. She facilitates retreats, nature-connection groups, and workshops including forest bathing.

In Japan, Shinrin means “forest” and Yoku means “bath,” so Shinrin-Yoku literally means bathing in the forest. The art of “forest bathing” was developed in Japan in the 1980s as a preventative health care and healing method. The country has now incorporated it into its health program, according to a report by The Guardian. A forest bathing session does not include soap and a washcloth. It simply means figuratively bathing yourself in the forest’s surroundings. A session usually entails at least two hours of a guided, leisurely walk under the forest canopy. The first portion of the practice offers a guided awareness of each sense, Jennifer says, to reconnect with oneself.

Jennifer asks the wilderness for permission to come in, because she says there is a doorway between the real world and the “wood wide web” of trees. She likes to go barefoot, to “slow down.” Next, volunteers find a clear spot that speaks to them. This is followed by a movement and then sitting practice and meditation on one’s own. Participants listen to the birds chirp, smell the fresh air, see the light stream through the trees, and feel the leaves. The session ends with a ceremony with homemade tea, organic fruit, and conversation about the experience. 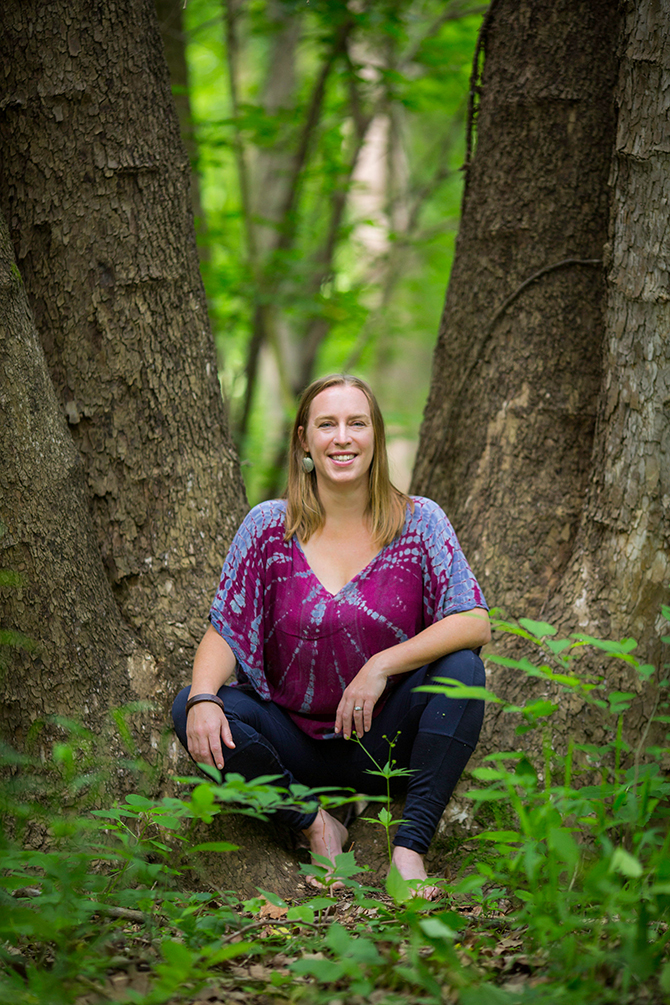 Jennifer Owens is co-founder of Bridge Counseling and Wellness. Photo by Kylene’s Photography

Really, forest bathing is all about breathing. You could compare it to yoga without the exercise. Its goal is to have the bathers clear the clutter out of their heads and meditate, even to see the world a little differently.

Jennifer suggests leaving electronic devices in the car for the full effect. “Connecting is stressful,” she says, as everyone is on alert for a buzzing phone. Instead, she says, being disconnected can make participants feel safe, rested, and free. “Sometimes when we’re tethered, there’s no freedom there,” she says.

Forest bathing can be done year-round, but Jennifer encourages participants to wear layers, tennis shoes, or sandals to protect them from nature’s elements.

Even if one does not think nature is relaxing, Jennifer says buy a houseplant. Even those, she says, can decrease symptoms of depression and anxiety. Skeptics should just try forest bathing before they judge it. “Just do the practice, and you decide for yourself if it doesn’t work,” she says.

Jennifer has many favorite spots around Louisville’s forested areas including Cherokee Park, Bernheim Forest, Iroquois Park, and the Parklands of Floyds Fork. “We’re utilizing green spaces in a passive way,” she says.

P.S. See how this woman changed her life, holistically, for the better.