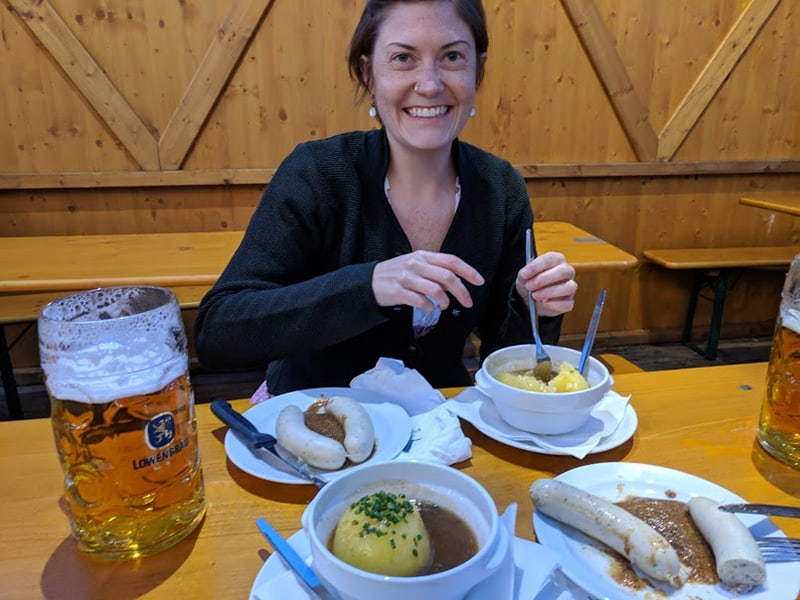 Meredith enjoys a hearty meal in one of the beer tents at Oktoberfest.

As a resident of Germantown and member of the German-American Club of Louisville, Meredith Grisanti, 29, is no stranger to the lavish fun of Oktoberfest. Giant steins of beer, lederhosen, and polka music? She’s been there and done that, and , , , (one, two, three, guzzled) with the city’s best Germanophiles. So when her husband, Alan, proposed a trip to Bavaria to experience the real thing, she said, “Ja, !”

In June of last year, Meredith stumbled upon roundtrip airfare from Louisville to Munich for $560, so she jumped on the bargain despite the quick turnaround for trip planning. Oktoberfest takes place in Munich in late September, so the couple only had a few months to plan their epic (budget) German road trip. Fortunately, Alan had studied abroad in college in Eidenberg, Austria, and speaks fluent German, so his expertise helped to plan the details of their 10-day trek through the southern German region.

The couple flew into Munich and rented a car to make their way north toward Nuremberg. From that point, they snaked their way through the historical cities of Bavaria, staying in quaint Airbnb vacation rentals along the way (for an average of $40-70 per night). Meredith loved the rentals, most with kitchens where they could grab a quick breakfast before beginning the day’s sightseeing. At the end of the road trip, the two returned to Munich where the quiet, stern Bavarian culture morphed into a spectacle of hedonism and raucousness otherwise known as Oktoberfest! 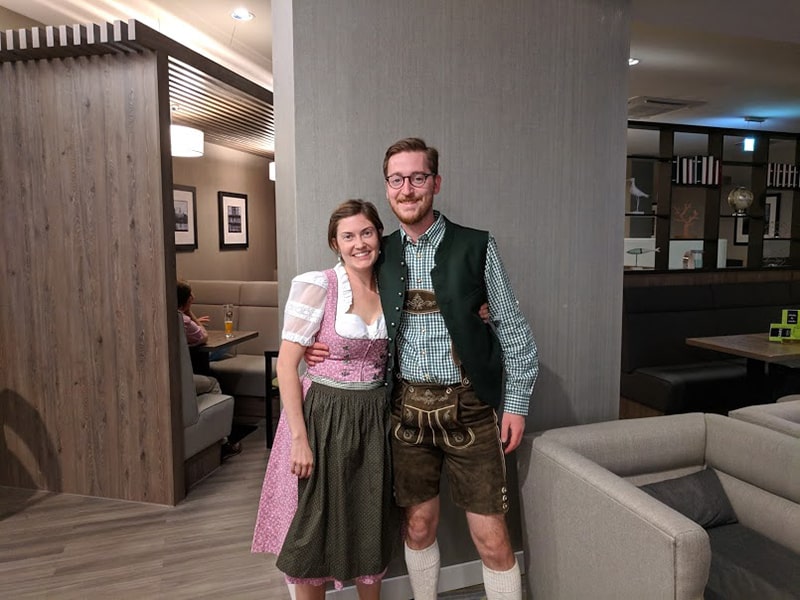 Alan and Meredith are dressed in traditional German garments while attending Oktoberfest.

They pulled in around and couldn’t believe their eyes. Crowds of people of all ages and nationalities were passed out from a long day of beer guzzling doors open at , so it is customary for patrons to begin drinking in the morning, and most residents take lunch breaks during the festival to imbibe a liter or two.

“It seemed by nine that no one was sober — we were apparently late,” Meredith says.  “It was crazy saw an old man passed out and unresponsive at a table near us. As a nurse, I felt obligated to make sure he was going to make it. I had to wrestle with the thought of possibly having to revive this man.” Meredith explained that during the festivities, the Red Cross (Germany’s equivalent of EMS) does 70 its yearly business.

The beer “tents” were actual wooden buildings erected for the occasion and were equipped with ornate lighting and fabrics. Meredith explained that the two-week event takes 10 weeks to set up and five weeks to break down. Crowds of people from all over the world were . “It was like the state fair on steroids!” Meredith said with a laugh. Although she was happy to drink her liter of beer from an iconic stein during the famous international festival, two days, she says, was definitely enough.

In addition to this advice, Meredith also recommends narrowing down the vision of your trip if Bavaria (or other international travel) is on your bucket list. There is so much to see in the region that Meredith recommends planning your trip through a specific lens: academic and historical, culinary or beer-based, or active. The Grisantis decided to have an active/outdoor experience and traded the museum tours for city and forest hikes, communing with locals, and creating a true road trip vibe. Meredith also cautions against over-planning. Her favorite experience, a train ride to the Zugspitze (Germany’s highest peak), unfolded after another plan to tour the castle that inspired Walt Disney World’s Cinderella’s castle didn’t pan out.

If Oktoberfest and Bavaria are in your sights, check out the rest of Meredith’s Bavarian road trip itinerary below. 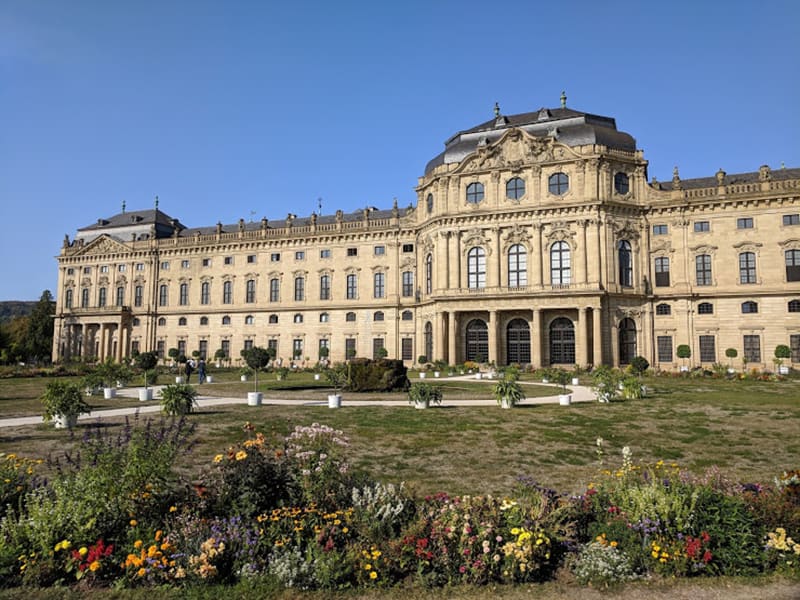 The Residence is one of the most important baroque places in Europe. 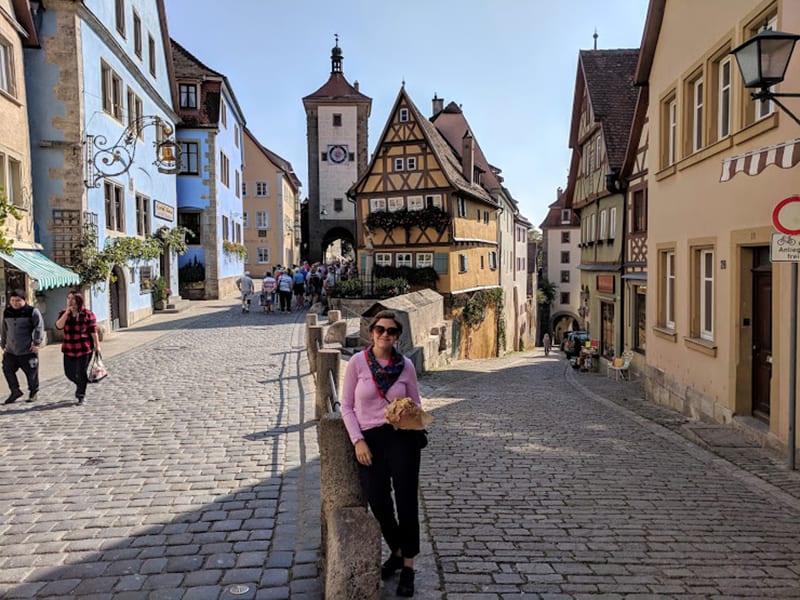 The Rothenburg is a village in the Bavarian region of Germany. No cars are allowed in this city. 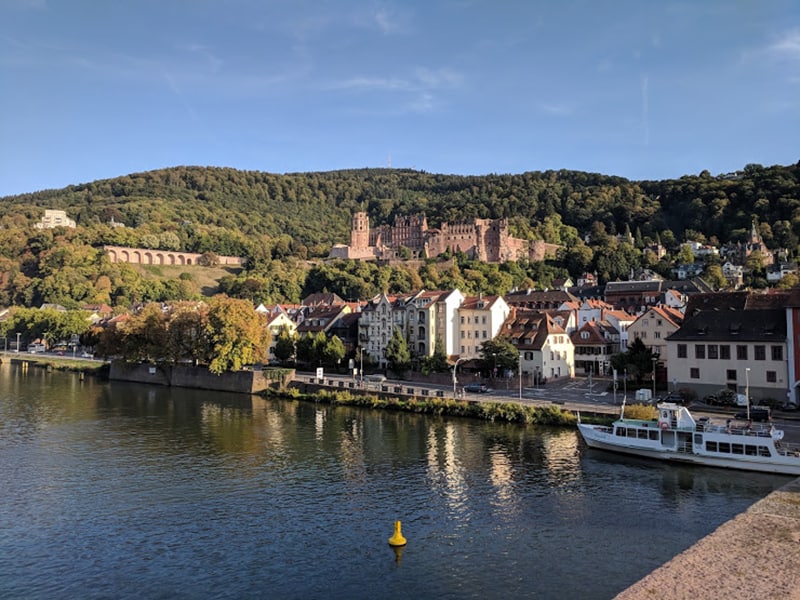 A view of Heidelburg Castle 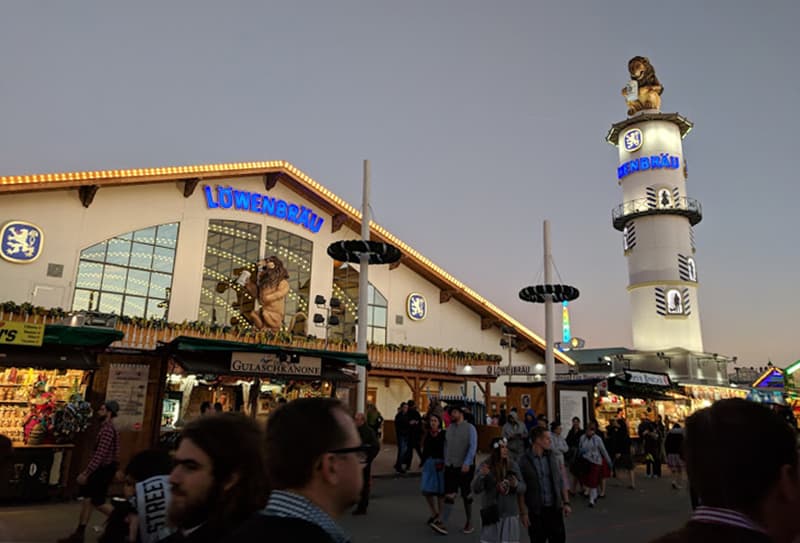 Outside view of the Lowenbrau beer tent 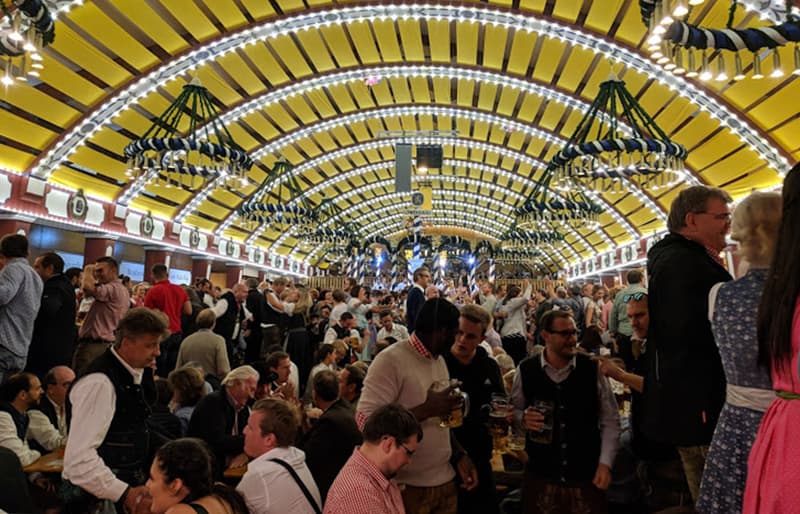 Inside view of the Lowenbrau beer tent 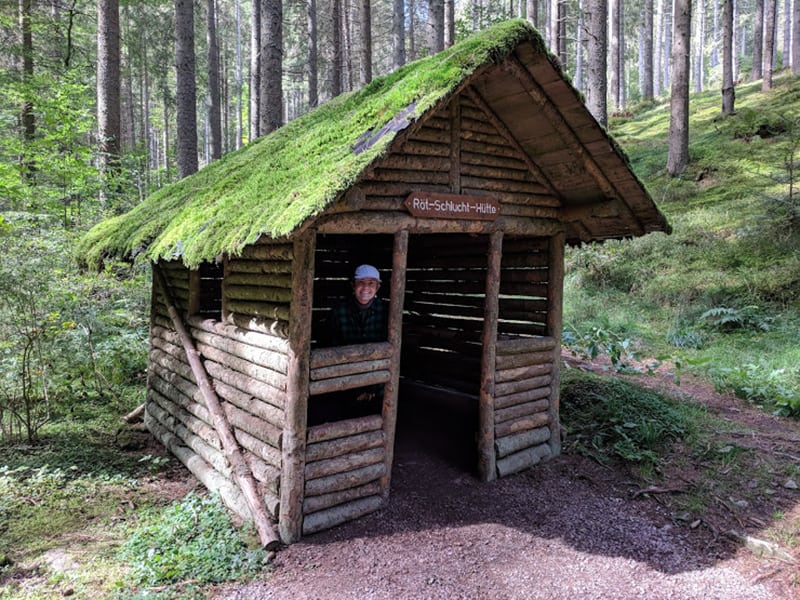 Meredith and Alan hiked a trail in the Black Forest. 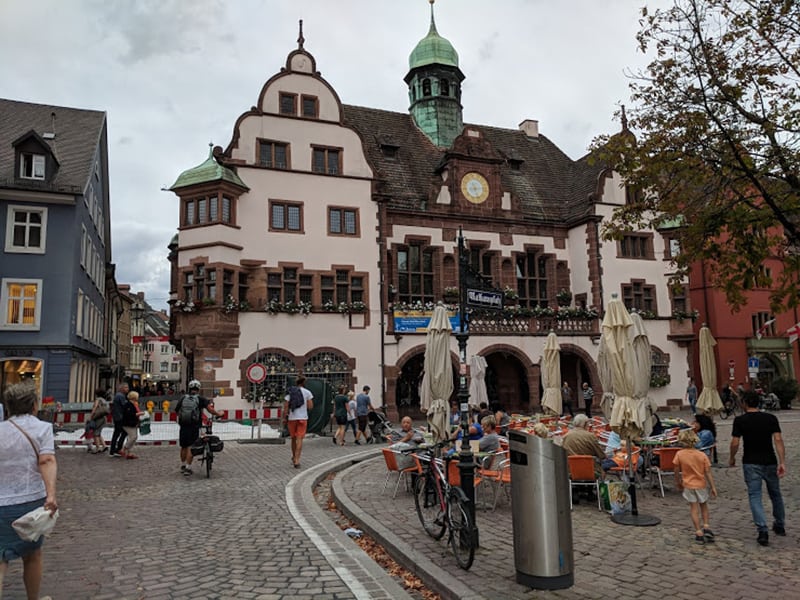 The town of Freiburg 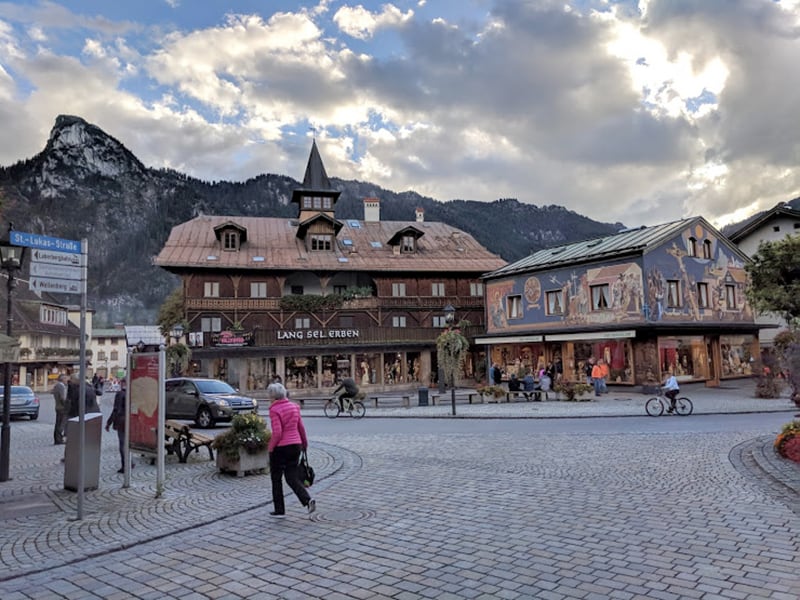 Oberammergau is a ski town in the Bavarian Alps. 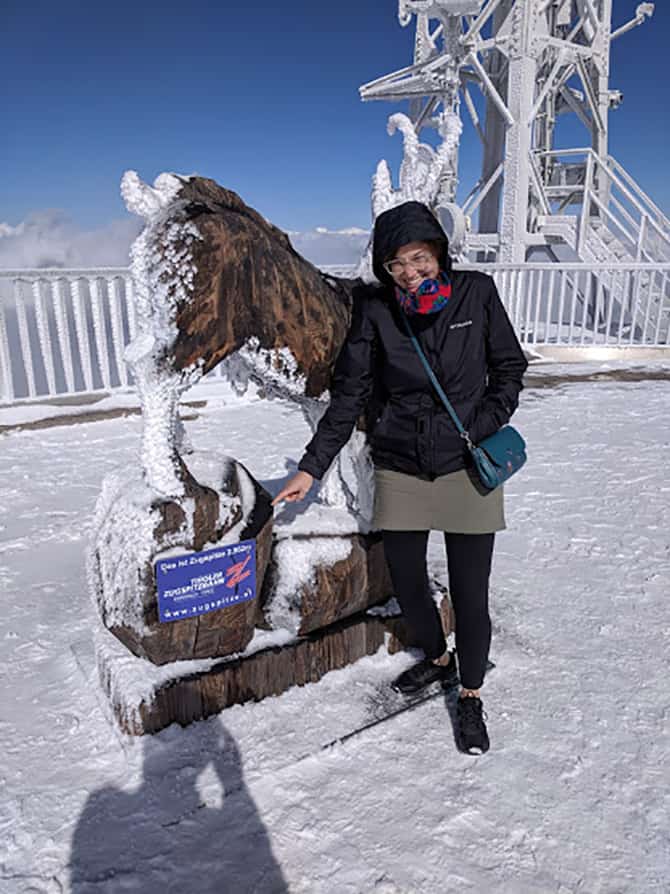 Meredith stands on the peak of Zugspitze mountain which is the highest peak in Germany. 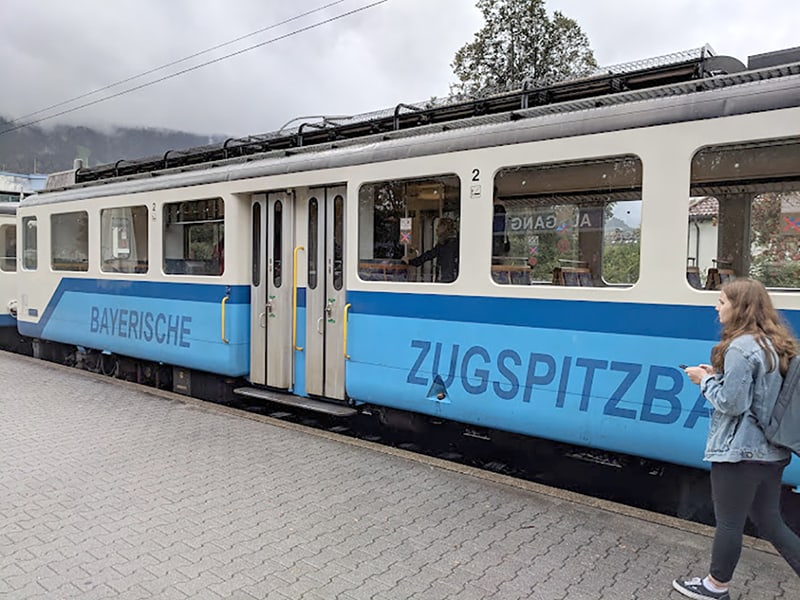 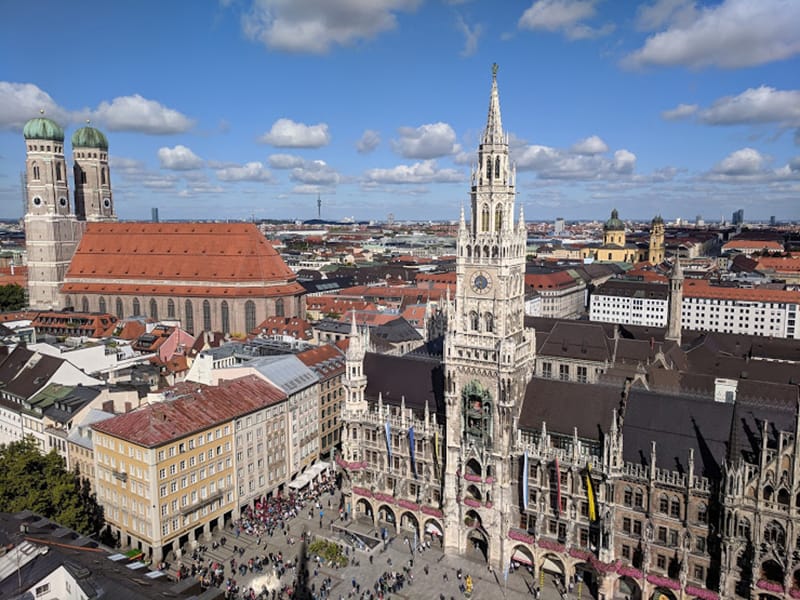 The Marienplatz Munich is a central square in the center of Munich.