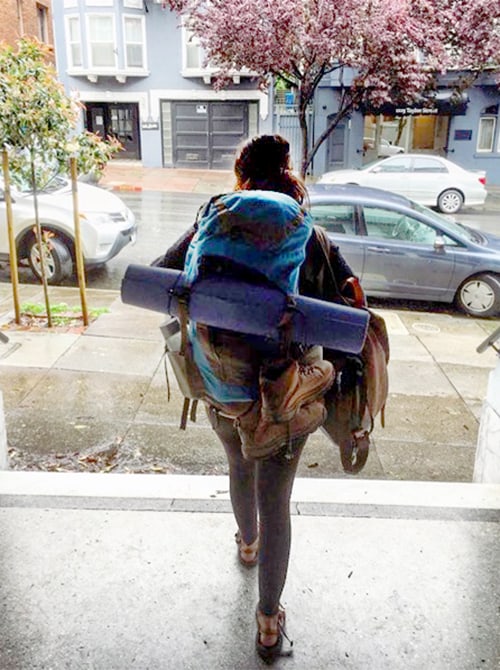 Travel changes you. The late and lovely Anthony Bourdain said, “The journey is part of the experience —an expression of the seriousness of one’s intent. One doesn’t take the A train to Mecca.” 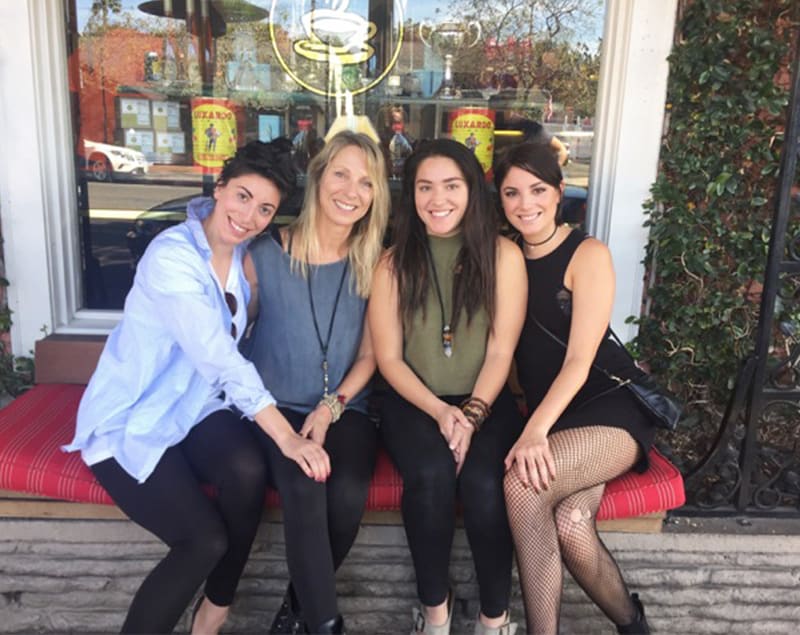 Sabine traveled to California with the intent of creating a business plan for her future yoga studio. Here she sits with her daughters. From left: Sasha, Sabine, Gabriella, and Nicolette.
For the mother-daughter duo behind the recently renovated The Inner Warrior boutique and community donation-based yoga studio in Distillery Commons, the journey is the nucleus around which all else revolves. Sabine Gaona, 57, began her personal journey years ago when she was going through a spiritual slump. “I needed something to make me strong again,” Sabine says, “so I committed to three months of daily yoga practice.” Instead, three months turned into three years of daily classes, and eventually evolved into a way of life.

Sabine’s youngest daughter, 16-year-old Gabriella (now 24), was also going through a rough patch. A close friend of hers had committed suicide, and Gabriella found herself consumed with grief and feelings of discontentment. Inspired by her mother, she also began daily yoga practice. The two women began centering their entire day around their yoga classes and found that after yoga, they felt they could take on the world.

“At the time, we were always in it for the workout… We were healing together through our situational depressions, but something was missing,” Sabine explains.

On Sabine’s birthday, Gabriella gave her a rock inscribed with the message, It is up to you. That message triggered Sabine’s lightbulb moment: she realized she had to create her own happiness, and that in order to do that, she would need to step out of her comfort zone and do something bold. And from this epiphany, The Inner Warrior’s journey truly began.

California was the place that changed both women’s lives. It was their Mecca, so to speak.

In the summer of 2014, Sabine traveled to Los Angeles to immerse herself in the research needed to open a business. Getting out of town allowed her to free herself from the distractions of home and see how similar business models worked on the West Coast. After the message on the rock, Sabine decided to forge unknown territory and open a yoga boutique that sustained itself on environmentally conscious yoga accessories while offering free yoga to the community. This community-based concept offers donation-based yoga classes, and practitioners donate what they can. Sabine did not want to profit off the yoga classes, as she felt in her heart that yoga should be accessible to all and those who need the healing of yoga the most sometimes struggle to afford it. At The Inner Warrior, all classes remain donation-based, and after the instructor is paid, the remaining donations go into a fund for equipment, charity, and keeping the lights on. All of this came to Sabine at The Silver Lake Coffee Shop in LA, where she would sit for hours a day figuring out how to birth this baby of a business. 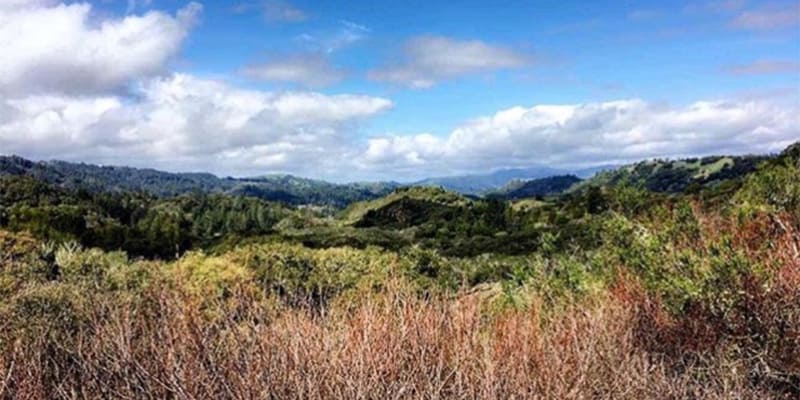 Gabriella attended a week long yoga retreat here in Mayacamas Ranch located in northern California.
“California is staple for this store. Initially that is where all our clothing came from, and we came up with the name and logo over text messages from the coffee shop. The collective energy that happens in a coffee shop helped me to be productive and figure things out. I always thought that I had to have everything figured out, but it turns out you can just learn as you do, and that is what we did,” Sabine says.

“The boutique side of the business was ironic. Gabriella and I always practiced in yoga pants with holes. We really just threw on anything before class. But I wanted to be able to sell environmentally conscious clothing that was no fuss and made people feel good.” Sabine didn’t know if her business model would work, but it is what called to her from the inside. And her inner warrior was able to silence all the dissent she heard from concerned friends and family. “It’s just what I felt in here,” she says as she points to her heart. So that fall, she opened up the first studio off Frankfort Avenue.

In March 2016, at 21, Gabriella enrolled in a traditional Raja Hatha and Ashtanga yoga instructor training program in San Francisco. She was struggling with her spirituality and her Catholic parochial school upbringing and considered herself an atheist. “[The training in San Francisco] is where I found my spirit. I’d always heard that yoga could lead you to enlightenment, and after learning the eight limbs of yoga and reading The Living Gita, I realized all the world’s religions say the same thing. I realized my search wasn’t external, it was inside myself,” she says as she places a hand on her heart’s center. “I learned to connect to a higher power and became a spiritual person. I carried the Bhagavad Gita around with me every day for a year. It was a complete mess with a taped on cover and markings all over the margins. Everything in my life shifted after this trip.”

Gabriella says the training was exactly what she had been searching for. It consisted of a 28-day yoga practice that included body and breath work, research, and meditation. She would practice on the rooftop of her father’s building each day looking out over San Francisco, and attend yogic retreats on the weekends, where she would engage in intense yoga practice with her guru for many hours at a time. The group took a seven-day retreat to the Mayacamas Ranch in northern California wine country, where they learned to connect with nature and “realize the divinity of life” as they hiked trails lined with eucalyptus plants. She learned Samadhi meditation where you literally become “one with a flower,” ate an organic vegetarian diet, slept in humble two-bed cabins, and learned to cultivate her true body, mind, and spirit. 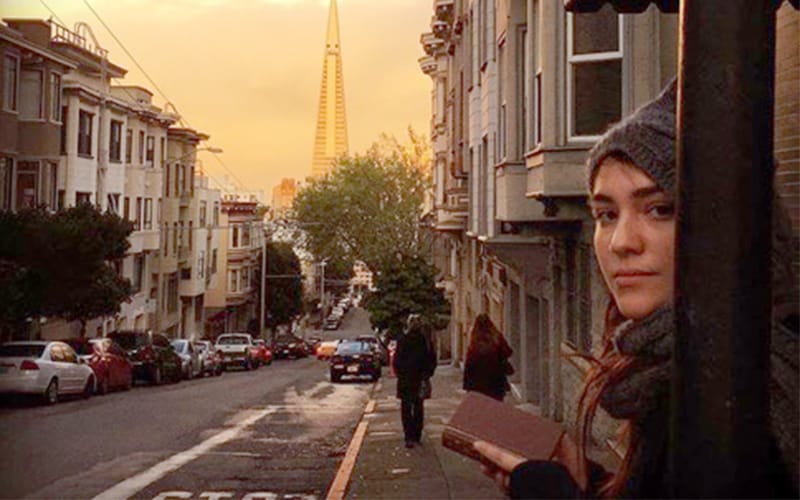 Gabriella is in San Francisco where she participated in yoga training.
“On the last day,” Gabriella explains, “I could feel I was coming down with the flu. My father’s flu had just progressed to pneumonia and I could feel the symptoms, but it was my last day to practice with my instructor, so I decided to just go for it and practice anyway. During our practice I tapped into my inner self, which I had learned is always healthy and strong, and by the end of class, I came out healed!”

Gabriella brought her newfound mindfulness back to The Inner Warrior and founded “My Path,” a three-day yoga, meditation, and camping retreat. The shift in focus to encompass all eight limbs of yoga, not simply the physical exercise, has inspired hundreds throughout Louisville. Just this summer, in fact, The Inner Warrior relocated to a larger space in Distillery Commons on the corner of Payne Street and Lexington Road to accommodate the growing community of practitioners.

This Saturday morning, in the midst of another oppressive July heatwave, I counted 23 people from the delightful view of my downward dog. Twenty-three people looking inward, standing strong in their warrior poses, ready to face whatever obstacles might stand in their way as they exit the sanctuary of the yoga studio’s front door. In my corpse pose at the end of class, I was feeling exceptionally grateful and content with my life for a tiny fleeting moment, and was hit with Sabine’s words from our interview a few days prior: “If people have a wonderful experience here, they take it home to their family. How can you turn anyone away from that experience?”

At that moment I realized The Inner Warrior’s journey has come full circle. Sabine and Gabriella needed California to start the journey home.