The Family That Suffered a Huge Loss 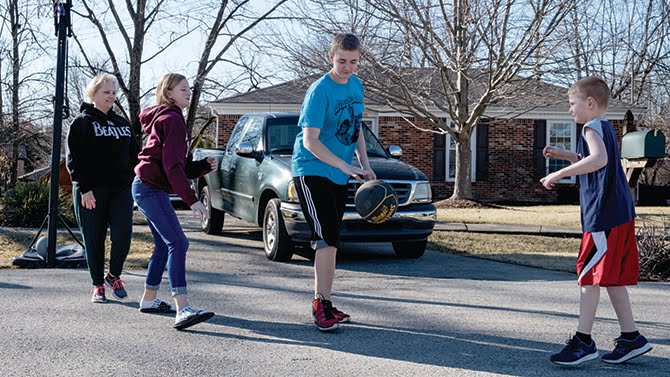 Nancy Bickers met her late husband, James, at a Bible study when she was 19 and a student at the University of Louisville. She married him when she was 21. James died on September 29, 2016, from the effects of alcoholism. He was 45 years old. “I did not expect to lose him at such a young age,” Nancy says. “When you get married, you expect to be married 50 years.
When Nancy talks about James and his addiction, she does so with love, sadness, and a quiet honesty.

As a young married couple, they didn’t have a dime. They started a graphic design business together called Images and Words Inc. Nancy says James was a good writer and “was so talented at being creative.” He was always a bright person, having skipped the eighth grade and entering college at 16.

Many Louisvillians know of James from his long career with Louisville Public Media and loved hearing his voice on the radio, but Nancy says James never realized just how wonderful he was. “The funeral was so healing for me. If only he could have seen how important he was, it would have changed his life. He never felt good enough,” she says.

In January 2016, James was first hospitalized as a result of his drinking. “I knew he was drinking too much. If he had gotten sober, his body would have recovered. He wasn’t ready to give it up, though,” she says. At the time, she was so angry with him, and the kids were, too. Part of what the family has dealt with in their grief counseling in the year following James’ death is all the different emotions they’ve experienced — from anger to sadness to guilt.

Nancy looks back on James’ last months wistfully. “I wasted time being angry, not going to the hospital because I didn’t want the kids to see him. Maybe that was God’s way of sparing us,” she says.

There is no good time for children to lose their father, but puberty is definitely not the time you’d pick if you had to. Miles, Lucy, and Ellery are doing well in school, but Nancy says sometimes it is hard for her to know whether outbursts or moodiness are a result of grief or just normal teenage behavior. When the kids fight, as all siblings do, she says it is so refreshing because she feels that at those moments the family is dealing with “normal issues.”

Nancy continues to go to counseling. “I feel like I’m starting my life all over again,” she says. She and James were married for 25 years, and she says her entire existence was their family of five. She and her children are learning to navigate their new normal, and it is difficult: “It’s not what we’re used to, and we don’t know how to do it,” she says.

Still, Nancy is hopeful. The support she has received from people has been overwhelming: “I feel like in the long-run, I’m learning how to be a more loving person, a more open person, allowing God to work letting love in. We’ve allowed people in to help us.”

Miles plays an instrument. Ellery can memorize movie/show and Youtube channels. Lucy is great at applying makeup and being on stage. Nancy can pick out who is who among her three children from only a cough or a footstep and is amazing at cheering people up.

Fun that costs nothing:

Our favorite thing is playing Rock Band! We love singing and playing the drums/guitars.

The whole family agrees on:

Any Pixar movie because they are classics, and we grew up watching them. The Incredibles and Monsters, Inc. are our favorites. We watched them with James, and we’d laugh a lot. We haven’t watched them as much since he’s been gone.

A household task that no one can stand:

Doing dishes. We try to take turns, but Mom always ends up doing them mostly.